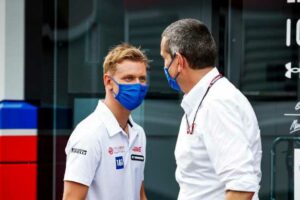 Guenther Steiner says Mick Schumacher’s dream of winning a World title can become a reality, it does however depend on him making the right career moves.

Schumacher arrived on the Formula 1 grid this season with the spotlight shinning brightly on the German, the son of seven-time World Champion Michael Schumacher.

It is fair to say that never before has the media and fans’ attention being so focused on a rookie driver.

But rather than cave under the pressure, Schumacher has gone about his job in an always professional and friendly manner, the 22-year-old often praised for his focus and willingness to learn.

It’s those traits, along with his speed, that Steiner says can carry him to a World title, if of course he is with the right team at the right time.

“He’s not just here to complete the 20 drivers,” the Haas team boss said in an interview with Sport1.de. “He is here to become World Champion.

“You always have to be in the right place at the right time. However, the better you are, the greater the chance of making the right decisions and of being hired by the right teams with the best car.

“Mick has the facilities, even if it is not yet possible to say with certainty that he will be World Champion. But I do believe in him.

“He also has the urge to do it, he wants to become world champion and that is also important.”

The @haasf1team never cease to amaze me. Words cannot explain how much I appreciate their hard work, especially these past three weeks. You deserve all the credit in the world!! Thank you!!🙏🏼 #MSC47 pic.twitter.com/kShZLTq0Jq

As for carrying the weight of the Schumacher name, Steiner says the driver has never used to cut corners or garner favour.

“Mick never uses his last name to generate an advantage for himself, he just does his thing as Mick,” he said, “but it wasn’t a real curse either.

“Sure it was a bit more difficult with the media hype in the beginning, but Mick handled it well. He learned a lot there in a short time.

“Apart from that: he doesn’t get any advantage with us because his name is Schumacher. We have two drivers on our team who are treated equally.

“One is the sponsor’s son, the other has a famous last name, it doesn’t make any difference to me.”

Heading into the final two grands prix of this season, Schumacher is holding down 19th place in the Drivers’ Championship.

Although he has yet to score a point, Haas lapping at the back of the field this season, his P12 in Hungary means he’s ahead of Robert Kubica and his Haas team-mate Nikita Mazepin.

Asked to give Schumacher a grade for the season, Steiner replied with a laugh: “I’m actually not a senior teacher. I don’t like to give grades. That’s a number that gets stuck.

‘Mick went through a very good development this year, he can be happy with what he has learned. I think that prepares him well for 2022.

“There will certainly still be one or the other mistake. Mick is 22 years old, that’s still very young. And Formula 1 is a very difficult world. Not just in terms of driving.

“All in all, he’s doing a very good job, so I think he’s on the right track.”