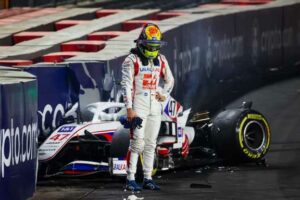 Mick Schumacher says that he doesn’t get angry after making mistakes as he sees them as part of his development.

The German made a fair few errors in his rookie season on the Formula 1 grid, costing his team more money in crashes than any other driver did over the course of the year.

In fact, after the first half of the campaign, Haas team boss Guenther Steiner was publicly critical of his driver for that reason.

“Mick in the last five races had quite a few big ones,” the Italian said.

“It’s a lot of money and for no good reason. They are getting a little bit too frequent and too heavy.”

While Steiner may get angry with Schumacher’s mistakes though, the German himself doesn’t as he feels that he learns and develops as a driver because he makes them.

“I think that you can definitely get angry about it,” he said as per Motorsport-Magazin.com.

“But I don’t dwell on it too long. I am not extremely annoyed about any mistake, because mistakes are there to be learned and everything is part of the development.”

Last testing, last session this year with the team. It’s been such an incredible year of learning and growing, with the best group of people. Thank you @haasf1team, I’m so  excited for our next season together🤩 #MSC47 pic.twitter.com/0Yv6OCXSB0

His mistakes didn’t prove too costly from a sporting perspective with him unlikely to score points or even finish above anyone other than his team-mate if he hadn’t crashed in the races where he did so given his machinery.

That’s another reason that he’s not too annoyed.

“It’s better that this happened to me now when we weren’t racing for points, than if next year things went the way we’d like and then, stupidly, it happened,” he added.

Asides from the errors, it was a largely positive first season for Schumacher with him far quicker than the other Haas of Nikita Mazepin the vast majority of the time.

All in all, he’s happy with how things went and with making it into Q2 in Turkey in particular.

“I entered this season without great expectations. Accordingly, it was neither better nor worse. All in all, however, it went well,” he stated.

“We were able to get into Q2 on our own, which was great. So there were ups and downs that I learned a lot from.”

He also feels that, despite not developing their car, Haas managed to close the gap to the teams ahead of them.

“It’s something we didn’t really expect this year. We’re pretty happy about it,” he added.