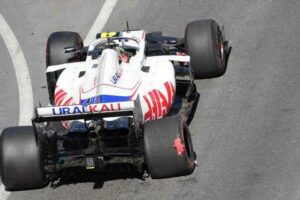 Mick Schumacher is not getting caught up in his incident in Thursday practice, they are part of the deal at Monaco, right?

Arguably for the first time this season Schumacher found himself in a real battle for pace against Haas team-mate Nikita Mazepin, and he would in fact finish behind the Russian in both FP1 and FP2 at the Circuit de Monaco.

It was also Schumacher who had the unwelcome honour of bringing out the red flags during FP2 when he had a brush with the barriers at Massenet.

Unable to get back to the pits, he would park the VF-21 up in the run-off area at the Nouvelle Chicane.

But at least now with that incident out of the way, Schumacher has learnt the limits of the track.

To celebrate the return of the Monaco Grand Prix, F1 TV are offering PlanetF1 readers 10% off their Access and Pro subscriptions! Click here and use the code PLANETF110 at checkout*

*offer expires midnight on Sunday, May 23

The margins are fine, the learning curve is steep #MonacoGP 🇲🇨 #F1 pic.twitter.com/QvcbZgNr66

“The feeling in the car, the feeling with the team is great, obviously on high fuel we’ve had a small issue in the last lap, but even that I think it’s part of the deal in Monaco, right?” he told the Formula 1 website.

“There’s no room for mistakes, I did a small mistake and that’s what happened. Now I know the limit and I know how far I can go.

“I think in general it went very well. I feel quite comfortable in the car. Obviously, we know what we have to improve, we know where potentially we lost a bit of time.

“I think we have to say we are not having any big upgrades coming our way, so the only improvements, the only changes we can do is within ourselves in the set-up, and I do feel we as a team are making progress.

“Obviously Monaco, here, you never know before it goes to qualifying so we’ll just do our jobs, do our routine, and work on ourselves to then be as prepared as we can be for qualifying.”

Mazepin relished the opportunity to be back in Monaco, and for the first time it “actually felt like a day off” as he found confidence behind the wheel of the Haas.

“Monaco is unbelievable to be at, regardless of if you drive or not, looking at the camera now just seeing the backdrop is something else,” he told reporters in the TV pen.

“It was a very good day today for us, the team has done a fantastic job to come away from a difficult weekend in Barcelona, and I had the necessary confidence in the car that I needed.

“And I’m surprised to say with how this year was going, but I had so much fun in the car that it actually felt like a day off and it was just cool to drive.”