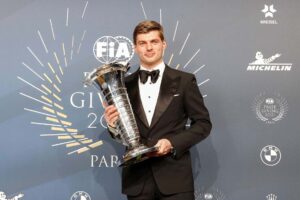 Verstappen’s compatriot is a three-time World Champion in his own right in darts, having taken the top prize in his sport in 2014, 2017 and 2019.

‘Mighty Mike’ formed a rivalry with darts great Phil Taylor in the latter stages of his career, and eventually dethroned the Englishman at the top of the game.

Van Gerwen is currently in London in search of his fourth World title – saying that he would only say his tournament was successful if he wins it.

A brilliant showing from Chas Barstow, but Michael van Gerwen proves to be too strong, seeing out a superb 3-1 set success to close out tonight's action!#WHDarts pic.twitter.com/QMFEfhRSVH

Having witnessed the Red Bull driver win the World Championship in unprecedented circumstances in Abu Dhabi, Van Gerwen enthused about how both Max and Jos Verstappen have managed to get to this point and achieve their “ultimate reward”.

”What that boy has done is truly world class,” Van Gerwen said to Dutch publication De Telegraaf, quoted on DartsNews.com.

“And not only him. Together with his father they have dedicated their lives to Formula 1, with only one goal in mind: to become World Champions.

“Last weekend was the ultimate reward. That they managed to do that is really brilliant. Of course he was lucky in the last lap, but if anyone deserved the title, it was Max.

“I hope I will soon be standing with the winner’s trophy in my hands like him, because only then will my World Championship be a success.”

Verstappen took the lead from Lewis Hamilton on the final lap of the season and there has been plenty of fallout from last weekend’s race in Abu Dhabi, given the controversy surrounding the race restarting.

But in a video posted by Formula 1, drivers revisited their pre-season predictions which were written and placed in a sealed envelope, which were opened once the year ended.

While some drivers were well off with what they wrote, it turns out Verstappen underestimated how successful he would be this year.