Michael Schumacher’s Benetton B192 to go up for auction 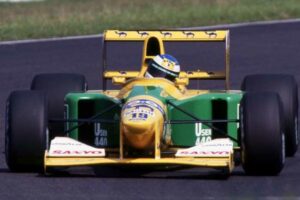 The Benetton B192 used by Michael Schumacher in his first full season in Formula 1 is to go up for auction ahead of the Tour Auto 2022 in France.

Schumacher drove the car in the 1992 season in which he would achieve eight podium finishes and one race victory on his way to a third-place finish in the World Championship.

The particular chassis up for sale is the one the legendary Formula 1 figure used during the German and Italian Grands Prix where he secured a podium finish.

The car has been listed on the auctioneer’s website with a price ranging from 9 million to 12 million euros.

The Benetton B192 will be sold ahead of the Tour Auto 2022 which sees participants race from Paris to Andorra in a range of cars dating from 1951 to 1973.

The event takes place over the course of five days and drivers will visit some of the most famous places in French motorsport history such as Le Mans.

Ferraris and Jaguars will be on display during the 14-stage event and drivers will complete a total of 2,000 kilometres in what is the 31st edition of the event.

Schumacher’s car is not the only vehicle up for sale though and some of the others on offer are a Talbot T26 Grand Sport which participated in the 1949 Le Mans 24 Hours, a Ford Sierra Cosworth which was the 1987 French rally champion, a 2005 Lamborghini Murciélago Roadster and a Peugeot 206 WRC.

It is the second time in recent months one of Schumacher’s race cars has been put up for auction with his Hungary 1998 Ferrari car being put on sale for $4.9 million in March.

That car would have been particularly special to Schumacher who described the win in Hungary as one of his “most emotional.”

“The team picked the right strategy, although at first I was not quite sure if our plan would work out, as I was stuck behind Jacques and David for some time,” he said at the time, as reported by Motorsport.com.

“In the end, it turned out that the team had made the right decision. Of course, we benefited from the problems of our competitors, although throughout the race I could easily match the pace of the McLarens.

“Ross told me I had 19 laps to make up a 25-second lead to stay in front after my third pit stop, so I pushed as hard as possible.”