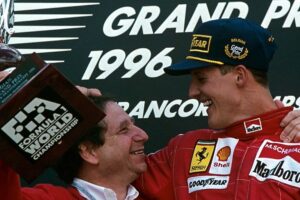 While little, make that very little, is know about the current medical condition of seven-time Formula 1 champion Michael Schumacher, FIA president Jean Todt offered at least a little crack of the door into Schumacher’s curent life.

Todt, who is in the final year of his term as president of the FIA, is still close to the Schumacher family. Todt says that Schumacher “survived” but suffered “consequences” as a result of his 2013 skiing accident while on vacation in the French Alps.

It is widely believed, but has never been publicly confirmed, that Schumacher is permanently brain damaged as a result of the incident of almost eight years ago.

“I’ve spent a lot of time with (Schumacher’s wife) Corinna since Michael had his serious skiing accident,” Todt, who was Schumacher’s team boss at Ferrari, told Bild newspaper. “She is a great woman and leads the family. She didn’t expect that. It happened suddenly and she had no choice.”

Todt, 75, has remained one of the very few people who is close to the Schumacher family, and therefore has some knowledge of the German’s health condition.

“Thanks to the work of his doctors and the cooperation of Corinna, who wanted Michael to survive, he did survive. But with consequences,” Todt said. “At the moment he fights the consequences. We hope that things will slowly but surely improve.”

In the meantime, Todt says he still visits the family regularly and fully supports the Formula 1 career of Michael’s son Mick, who races for Haas F1 Team.

“Mick is one of those people who always has a special place in my heart and that of my wife Michelle,” said Todt.