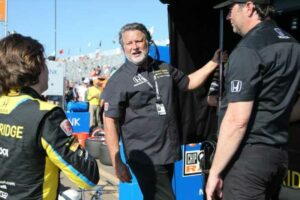 Michael Andretti says he is pressing on to develop a new Formula 1 team despite having been left hanging by the FIA.

The project would be the cherry on the cake of all the other enterprises in which Andretti is involved, covering IndyCar and two of its development series, Formula E, Extreme E, Australian Supercars and American endurance racing.

In trying to become the 11th team in the pit lane, the son of Mario Andretti, the 1978 F1 World Champion, has applied to the FIA but is still awaiting a ‘yes’ or ‘no’ verdict.

In the meantime, he is cracking on with his plans in the hope the answer is in the affirmative – having said last month he felt F1 teams were warming to his proposal after initial scepticism.

Michael has applied to the FIA to field a new F1 team starting in 2024. His entry, Andretti Global, has the resources and checks every box. He is awaiting the FIA's determination.

“While we are waiting, we are doing a lot of work behind the scenes, we are preparing for it, because we have to start,” Andretti told RACER.

“So we are doing things hoping we get a shot at it. We have to start making some moves and hope and pray the FIA allow us to have a shot at getting in there.

“We were hoping to know by now and unfortunately we don’t. But we hope it will be soon.”

In terms of what would happen if given the go-ahead, Andretti is expected to set up a base in the UK and take on a power-unit supply from Renault.

As for drivers, Colton Herta, who is one of his IndyCar racers, would be expected to become the first American on the F1 grid since his current team-mate Alexander Rossi in 2015.

That is despite Herta having signed a development programme with McLaren.

Andretti said last month: “The good thing is we’ve talked now to a lot of the team owners and we are getting support from all the team owners now after they heard our story, so that’s a positive.

“They have got to know how serious we are. We’ve been all over them, and I think there will only be good fall-out from Colton testing and how serious this is for all of us.

“We would help the value of Formula 1 and not take away from it, in terms of the value we would bring to the bottom line will basically cover what we would be taking out of our side of the prize money.”