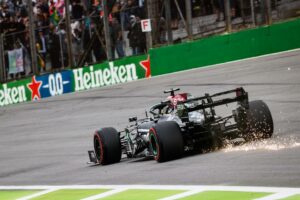 Mercedes have accepted the FIA’s decision to send Lewis Hamilton to the back of the sprint qualy grid in Sao Paulo after a DRS infringement.

Shortly after qualifying concluded on Friday in Sao Paulo, with Hamilton sitting pretty in P1 on the sprint grid, news emerged that the FIA were investigating the DRS flap on the rear wing of Hamilton’s Mercedes, with tests following to determine the gap between then top and bottom elements when it was open.

The maximum allowed gap is 85mm, but the FIA found the DRS flap on Hamilton’s W12 to open to a wider measurement, spelling trouble for the seven-time World Champion.

The FIA determined that the DRS had not been designed by Mercedes to intentionally breach the regulation, instead noting that something must have gone wrong for the gap to become greater than 85mm.

Nonetheless, the ruling is black or white, and so Hamilton was disqualified from the qualifying standings, meaning he starts sprint qualifying from the back of the grid.

The Team will not be appealing Lewis’ disqualification from Quali.

We want to win these World Championships on the race track. 💪 pic.twitter.com/12rD4EoDYP

Mercedes could have appealed the penalty, at which point Hamilton would return to P1, but his results for the rest of the weekend would then be under threat, a risk which Mercedes were not willing to take.

Hamilton’s title rival Max Verstappen was handed a fine of 50,000 Euros after being seen touching the rear wing of Hamilton’s W12 in parc ferme, following the end of Q3.

But both Hamilton and the stewards agreed that Verstappen had not caused any damage to the rear wing.

Mercedes ‘believe some form of damage has occurred when running on track but have been unable to verify this hypothesis owing to the fact we haven’t had access to the parts.’

“At the end of the first hearing on Friday, amateur video emerged of driver Max Verstappen touching car 44 in Parc Fermé,” read the report in which Hamilton’s disqualification was confirmed.

“The stewards took the time to gather all the available video footage of this incident and finally reviewed in car footage from car 14, car 77, car 33 and car 44 as well as CCTV footage from the FIA’s pit lane cameras, in addition to the amateur footage.

“The stewards held a separate hearing in relation to this incident and incorporate the text of that decision herein.

“The competitor of car 44 also agreed that it was unlikely that Verstappen’s actions caused the fault, however they felt that it was an open question.

“The stewards, however, were fully satisfied, having extensively reviewed the totality of the evidence regarding that incident, that it has no bearing on this case.”

Hamilton will now look to work his way as far up the order as possible in sprint qualifying, with a five-place grid drop coming for the Sao Paulo Grand Prix after Hamilton took a fifth new Internal Combustion Engine of the season.