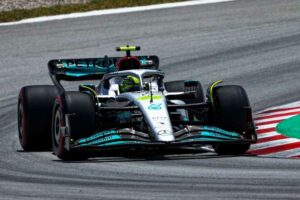 Mercedes chief strategist James Vowles has said there was a big difference in data from the pre-season test in Barcelona to last weekend’s grand prix.

While they still looked some way off the pace of the front runners, Mercedes made a return to form in Spain as upgrades made to the W13 appear to have finally fixed the porpoising issues that had hampered them so far this campaign.

Mercedes were one of the teams worst affected by the bouncing effect as it meant they could not maximise the potential of their car by lowering the ride height.

Vowles warned that the issue may still occur as the season goes on but has also said the data they recorded in last weekend’s race was vastly different to the data gathered at the pre-season testing event at the same track.

“I’ll try and break down the different elements of those [changes],” Vowles said in Mercedes’ post-race debrief video.

“The first is temperatures. We were seeing 36-37 degrees ambient during the race weekend. The track was somewhere in the mid-40s.

“During the test it is more typical to see 16 degrees ambient, maybe 17, and the track more typically around about low 20s, 22, 25 and that creates quite a substantial difference on how the tyres are performing. Generally, you go quicker in the cooler conditions.

“One, the tyres are in a slightly better window but also, when you have cool temperatures the air is dense so the power is slightly higher as a result and you generate slightly more downforce. But the other difference is that during the test for example we used the C5 compound – the softest compound of the Pirelli range.

“During the race weekend that was a C3, so you’ve got two steps of compound there as well for most of the cars on what they were doing. The difference also is that during the test you have very little of these compounds available to you.

“You are not doing a full qualifying programme, you are perhaps just doing one or two fast laps and during the race weekend again you have a qualifying session where you have sufficient amounts of tyres.”

Vowles also said that for Mercedes as well as most competitors, the car they ran before the season is absolutely not the same to the one taking to the track in Monaco this weekend.

“So ours visually was just a completely different car, the bodywork had changes, we had updated the car for Bahrain but that applies for our competitors as well, for the most part everyone has been evolving and changing their cars and that’s one of the beauties of Formula 1 – your car is rarely the same one week to the next.”

“You are continuously updating it, changing it, learning from the experiences that you have gathered across the previous race weekend and as a result of that, what you learned in February is going to be very different to the car that you are racing in May.”

Vowles and Mercedes will be hoping to continue their upward trajectory in Monaco this weekend.