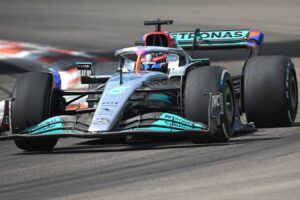 Mercedes have completed a filming day with the W13 at Paul Ricard, which reportedly sported the upgrades the team were planning on introducing at Barcelona this weekend.

Multiple reports have suggested the filming day took place behind closed doors in France on Wednesday with George Russell behind the wheel, although the team has not officially confirmed the running on its website or social media channels.

Ferrari also took part in a similar filming session at Monza last Friday, which saw the Scuderia reportedly trial their own upgrades for the Spanish Grand Prix with Charles Leclerc behind the wheel.

Teams are allowed two filming days per year with their current cars and, while they are limited to 100km of running per session, there is no rule against the specification of car they run, leaving room to test new upgrades in that time.

Italian journalist Giuliano Duchessa reported that Mercedes found progress had been made in their limited running too, claiming a new rear wing configuration and updated power unit being brought to Spain has seen them make a modest improvement of 3-4kph in straight-line speed.

Extra upgrades are also in the pipeline for the reigning Constructors’ champions for Barcelona, with the chief aim of trying to control Mercedes’ porpoising issues that have plagued them since the start of the season.

Russell admitted previously that the W13 is a “killer to drive”, given the extremity of the porpoising experienced while behind the wheel, which sees the car bouncing up and down in a straight line due to the configuration of the ground effect aerodynamics on the new generation of cars – and the British driver said it has caused him back and neck issues as a result.

But despite being “specialists in bouncing”, in the words of team boss Toto Wolff, Russell remains confident that once Mercedes solve the underlying issues in their car, they can be far closer to the front.

“I think we can find chunks and chunks of lap time if we can just find that killer key to get it in that perfect spot,” he said, per the Express.

“I’m not sure if that will be the next race but the guys are working day and night back at the factory and we all believe we can.

“We have to stick to our guns, keep pushing down this direction. It will be a number of races before we say we have to go a different way, but I believe in them.”