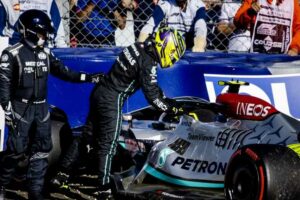 Mercedes revealed the eye-watering amount of damage caused by a pair of Austria qualy crashes, which compromised the rest of their weekend.

Lewis Hamilton smelt top-three potential in the W13 on Friday at the Red Bull Ring, his qualifying performance suggesting that he was in contention to achieve that aim.

That was until Q3, at which point Hamilton crashed heavily into the barriers, with team-mate George Russell also binning his W13 soon after the session restarted.

Hamilton was forced to swap chassis after that incident, but the repair job across both cars stretched much further.

“We’ve done quite a lot of damage to the cars so, we’ve broken both floors, we’ve broken both rear wings, we damaged quite a lot of suspension, on Lewis’s car we also damaged the front wing and done some cosmetic damage to the chassis. So, damage that we can repair but not repair over a weekend. That meant completely rebuilding Lewis’s car from scratch.”

At this point, a lack of spare parts became a big problem for Mercedes.

With only one spare floor and rear wing, Mercedes had to create another floor from the salvageable parts of the ones involved in the crashes, while the rear wing was given to Hamilton in a bid to help him come through the pack, having started the sprint from P9.

That left Russell competing with a rear wing which was not optimal for the Red Bull Ring.

“It meant also trying to build one floor out of two,” Elliott continued. “We had one complete spare we could fit and we had to get the best out of the two crashed floors to build another.

“And it also meant we were compromised on George’s rear wing because we only had one complete spare rear wing that we chose to fit to Lewis’s car because he was going to have to come through the field, which meant that George had to fit a rear wing which was probably not the ideal level of downforce, it was a bit too much downforce for that circuit.

“Having rebuilt the cars we also had to dial in the setup again and you’ve got very limited time in FP2 to do that and that was always going to be another compromise, and then finally having damaged two cars as badly as we did on Friday, the drivers are now in a position where if we damage them in the sprint race we may well be in a position where we couldn’t race on Sunday.

“So, all of that has to be factored in and all of that sort of compromises your weekend.”

Hamilton was able to recover to score a podium finish in P3, his third in succession, while Russell’s race was hampered by a first-lap collision with Sergio Perez and the resulting five-second time penalty.

He nonetheless was able to reach the chequered flag in P4.