Home » Racing » Mercedes 'must prove ability to react' in Bahrain

Mercedes 'must prove ability to react' in Bahrain 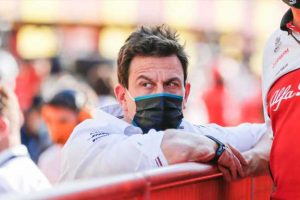 Mercedes boss Toto Wolff has called on his team to “prove our ability to react” at the season-opening Bahrain Grand Prix.

The Silver Arrows have been giving the impression that they head into the new campaign as a team that is vulnerable to attack from their nearest rivals Red Bull.

They have been simultaneously praising the strength of their opposition whilst highlighting the apparent weaknesses with their new W12 car, which has been described as “toxic” and “a diva” following a less than straightforward pre-season test.

Given how dominant Mercedes have been throughout the turbo hybrid era and the largely stable regulations for 2021, not many are buying into Mercedes’ perceived struggles, Red Bull boss Christian Horner included.

But, in his Bahrain Grand preview notes, Wolff heaped more praise on Red Bull – but did state that his team have been working tirelessly in order to arrive back at the Sakhir desert in the best possible shape to defend their World Championship titles.

It's been *𝙘𝙝𝙚𝙘𝙠𝙨 𝙣𝙤𝙩𝙚𝙨* zero days since someone asked us where we spent our development tokens.

“It feels like we have spent quite some time in Bahrain recently, and with mixed fortunes,” Wolff said.

Overall, it was a tricky three days of testing for us. The W12 wasn’t as stable, predictable or planted as some of our rivals. Red Bull looked strong on both the long and the short runs, but as always with testing, it’s difficult to be certain of true performance.

The only thing we know for sure is that we must prove our ability to react.

“From the moment the third day of testing finished, we got our heads down and started to figure out how we can return to Bahrain in stronger form in just a few days’ time.

“While these cars share some parts from their predecessors, there have also been significant rule changes to interpret and overcome.

“We have also had to change the way we work in response to the cost cap. But as we have found before, it’s from the difficult moments that we learn the most.

“This team’s biggest strengths are our people and our values, and after a tough test, I know that we can fight back stronger.

“I’m looking forward to getting this new and exciting season underway, seeing the progress we can make and how we fare in Bahrain.”