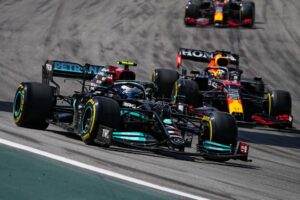 While Mercedes did discuss moving Valtteri Bottas onto a one-stop strategy per the Finn’s wishes, they said it would’ve been “very difficult” to execute properly.

Bottas was called in to pit a lap after Max Verstappen took his second stop in the Sao Paulo Grand Prix, which the Mercedes driver did not want to do – wondering on team radio if the team had “thrown away an easy 1-2” by not allowing him to stay out to try and make it to the end of the race.

Bottas still managed to come home third in the race, but felt another step up on the podium might have been possible if he was able to try and survive on just one stop.

But Toto Wolff feels stopping Bottas again was the correct call, to ensure he made it onto the podium and stayed ahead of Sergio Perez.

“I’m not sure we could have held on to a one-stop,” Wolff said, quoted by Autosport.

“Maybe, but it was risky also to lose P3 against Perez. I think it was OK. It was maybe marginal between the two, but we didn’t want to risk the place to Perez.”

Trackside engineering director Andrew Shovlin also confirmed that Mercedes were “talking about it” on the pit wall when coming up with Bottas’ strategy, but thought it was better to be safe than sorry.

He explained that seeing how Verstappen’s pace diminished towards the end of his hard-tyre stint at the end of the race was justification for the decision he and his team took to bring Bottas in.

“Valtteri felt it would work, and you gamble, but the problem is if you gamble wrong, then we could have risked a podium with Valtteri,” Shovlin said.

“With Lewis, when you think you can beat Max on the same strategy. you do that because we felt we had the car pace to really attack if we could get a bit of a tyre offset.

“So the option of going on an oddball strategy was discussed, but wasn’t that attractive because there is doubt and if you get it wrong you cannot win the race.

“You look at how Max dropped off on the hard tyre, it would’ve been very difficult and you have got to incorporate a lot of management.”