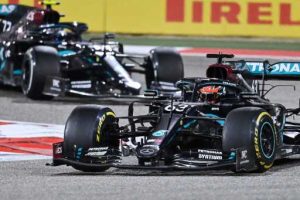 Mercedes has pinpointed a misbehaving sensor as the reason for George Russell experiencing power drop-outs at the Sakhir Grand Prix.

Although it was pit stops and punctures that ultimately dictated the outcome of Russell’s debut race run in W11, the British driver also reported during the 87-lap race that he was experiencing a loss of power on occasion around the circuit.

And Mercedes technical director, James Allison, has given a very clear insight into just what was exactly going on behind the scenes with this particular problem.

“I think it was the lap to the grid we saw that one of the sensors in the exhaust system of the car started to suffer some misbehaviour,” Allison said in Mercedes’ Sakhir Grand Prix debrief video.

“That misbehaviour meant that it just wasn’t giving the sort of consistent signal that we require in order for the normal operation of the power unit and this erroneous sensor value was starting to make the power fluctuate.

“Now, normally when we have these sensors start to misbehave the way that we deal with it is that we tell the car ‘just stop paying attention to that sensor please, it’s not reliable and use a back-up strategy instead’.

“The back-up strategy will not be as powerful as the main strategy that is based around a healthy sensor, but it will be a lot better than if it tries to base it’s input on this dodgy sensor.

“Now, the problem was that the action that we had got prepared for being able to turn that sensor off and ignore it. Annoyingly, it also had the effect of making the car ignore another sensor. Now, it shouldn’t have done that.

“It should have only ignored the one we were interested in ignoring and by effectively ignoring both of these sensors we bought ourselves another problem.

“And that other problem was that the second sensor that was being ignored is one that the FIA is interested in because it’s one of the sensors they use to monitor the legality of the car. Specifically, how much electrical energy are you discharging in any given lap.

“So, the FIA could understand what had happened but clearly, they would much prefer it if this second sensor was still online and still doing its business as it should be.”

Allison went on to say that the problem persisted because the first sensor suddenly came back to life on Russell’s car.

He added: “Now, a little bit later on in the race, the first sensor, the one that caused us the problem, stopped being just dodgy and looked like it had died a natural death all on its own.

“At that point we don’t any longer need to tell the car to ignore it because it is actually dead, dead, rather than sort of on a bit, off a bit.

“So, it was in our interest to switch the system back to normal so that the second of these two sensors, the one that the FIA want to look at, comes back online as well.

“So we did that and then for a while the car was basically behaving okay, it was not relying on the dead sensor.

“It was working in a back-up mode and the second of these two sensors was giving the stream that the FIA want to see for monitoring the electrical discharges but then, and this was probably the radio message that was sort of most obvious to the people watching the race, at a certain point in the race after the pit stop, the sensor that had died, or we thought had died, had a little bit of a sort of Lazarus moment and came back from the dead.

“At that point it started to make the power fluctuate again and it needed to be turned off a second time bringing back the other issue with the second sensor that we had at the beginning of the race.

“All of this was just an enormous pain in the neck for the guys in the garage to manage and also for George to manage.

“A hassle and a worry that involved him having to do a bunch of steering wheel switchery to try to get the car in a position where the PU could run happily with the mixture of sensors that were left and functioning correctly by later in the race.