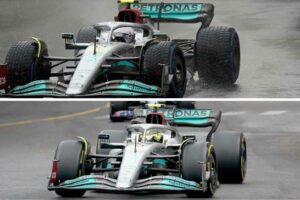 Lewis Hamilton changed his helmet design when the Monaco Grand Prix was red-flagged, and Mercedes have explained why…

Lewis Hamilton took part in the Monaco Grand Prix with two different helmets, taking advantage of the red-flag stoppage to swap from his Monaco-specific design to his more usual 2022 design of a fluorescent yellow/green.

Given the change in weather conditions during the course of the race, it’s perhaps no surprise that Mercedes have explained the reason for the change as being down to his specific requirements for running the weather.

“In those very dark wet conditions at the start of the race, they are running a clear visor and that gives them the best visibility in the spray,” Mercedes’ Andrew Shovlin explained in the team’s post-race debrief.

“When you get into the dry race, also the sun is a lot lower in the sky, the end of the race was near six o’clock in the evening and he then moves to a tinted visor just because it gives you better visibility, better contrast but also you avoid getting the sun in your eyes.”

Along with the helmet change, Mercedes also took the opportunity to replace Hamilton’s front wing during the stoppage. This was after he picked up visible damage to the wing as a result of a clash with Alpine’s Esteban Ocon.

Hamilton had been lining up the French driver for an overtake into Ste. Devote, only to have Ocon move across and squeeze him into the barriers – the pair making hefty contact as a result. Ocon was given a five-second penalty for the clash.

Shovlin also explained just how much performance loss Hamilton had picked up as a result of the collision.

“Looking at the data we get off the car, it was around one to two-tenths of a second.

“So not large and, conveniently, the red flag allows us to repair any accident damage, so we could swap that front wing without actually having any time penalty for doing the work during a pit stop.

“More pleasing was that that was the only damage that we had over the course of the Monaco weekend. So, really good job by both drivers to bring the cars home more or less intact.”