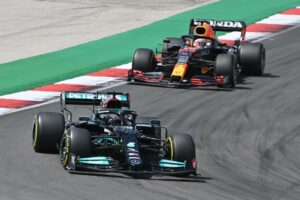 Formula 1 returned from its summer break with weather more akin to February than August as a soggy weekend at Spa ended with not a single racing lap being possible in the Belgian Grand Prix.

Despite that, Mercedes still packed up their equipment with reduced leads in both the Drivers’ and Constructors’ World Championships because half-points were awarded for merely two short runs behind the Safety Car.

Max Verstappen’s pole position was the key factor in that, for he now trails Lewis Hamilton by just three points in the Drivers’ standings while Mercedes are seven ahead in the Constructors’.

Wolff, the Mercedes team principal, was smarting about the decision to allocate half-points but said his team had to “take it on the chin and move on” – which they are doing with a short journey to the neighbouring Netherlands.

At a circuit much redeveloped since it last staged a grand prix 36 years ago, Zandvoort is a heartland of Verstappen supporters – but Mercedes are eager to upset the applecart.

“There’s still a feeling of frustration that we couldn’t race in Belgium last weekend,” said Wolff in the team’s Dutch Grand Prix preview. “We’ve never seen a situation like this and the conditions were incredibly difficult out there, so it was just not safe to race.

“If the weather had eased up, I think we would have been in for an incredible race for all the passionate and dedicated fans who were waiting in the rain. So, it wasn’t a satisfying feeling to leave Belgium with just a handful of laps behind the Safety Car, but it is what it is. We need to close that chapter and quickly move our focus to the next one.

“We lost points in both Championships last weekend but thankfully, we don’t have long to wait for an opportunity to extend those gaps and that is an exciting prospect.

“F1 returns to Zandvoort this weekend for the first time in several decades. It’s an exciting track for the drivers because it’s fast and flowing. It feels like a proper old-school track, so I am sure they are looking forward to taking on that challenge.

“As a team, we are relishing the challenge of tackling a new track because it is new for everyone and that means fresh opportunities to find advantage.

“So we will be looking to hit the ground running on Friday and take the fight to our competitors. It will be exciting to see who comes out on top.”