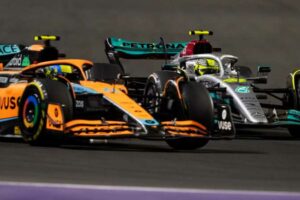 Mercedes have quashed speculation that their deficit to Ferrari and Red Bull is PU related, adamant their poor top speed in Saudi Arabia was “mainly due” to the set-up of the W13.

Having snuck onto the podium at the Bahrain Grand Prix, Mercedes had hoped for a better result at the Saudi Arabian Grand Prix. It was not to be.

Lewis Hamilton suffered a shock exit in Q1, the Briton only able to recover as far as tenth on Sunday night, while his team-mate George Russell was fifth.

Mercedes’ rivals believe a large part of their deficit is down to the power unit.

According to Auto Bild, the ‘once highly acclaimed engine was up to 0.5 seconds behind the Ferrari and Red Bull units on the high-speed track in Saudi Arabia’.

That deficit is said to be because of the switch to E10 fuel with Mercedes getting it wrong when it came to making adjustments to the combustion chambers to suit the new fuel.

Mercedes have denied this, saying that the PU was only worth a tenth or so of their deficit at the Jeddah circuit with rest of the gap down to the set-up.

“That’s a maximum of one or two tenths,” an unnamed engineer told Auto Motor und Sport. “The poor top speeds are mainly due to the higher air resistance.”

Lewis Hamilton admitted Mercedes are "a long way away" from Ferrari and Red Bull, and put simply:

Mercedes are struggling with the set-up of their W13 with its zero-pods and extreme porpoising.

According to AMuS, the drivers were ‘hopped wildly down the straights’ in Saudi Arabia as all the countermeasures that the engineers could come up with ‘fizzled out.

‘In the end there was nothing else to do but raise the chassis, which was at the expense of the pace.’

Toto Wolff has been quick to defend his engine department with speculation suggesting they are hurting from the the loss of former engine gurus Andy Cowell and Ben Hodgkinson.

“It’s important not to point your finger at individual areas of the car,” said the Mercedes motorsport boss.

“We operate as a team and we have deficits that are far greater than just an engine deficit. Are we among the top teams in any of these areas? I do not believe that.

“But you have to remember that this engine helped us win the Constructors’ Championship eight times in a row.”

He insisted that the set-up and the porpoising were also costing Mercedes in lap time.

He added: “We can’t use the car the way we want it, so it’s very difficult to assess what the lap time deficit would be if we could tune the car lower.

“I really hope that the gap is much smaller than what we saw [in Saudi Arabia].”