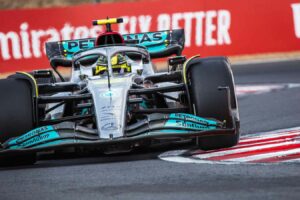 Mercedes trackside engineering director Andrew Shovlin admitted that the team’s car set-up experiments in practice did not pay off in Hungary.

Both Lewis Hamilton and George Russell struggled for form in FP2, with Hamilton reporting that his car felt unstable and Russell struggling with a locking front-right tyre.

Hamilton sounded frustrated on team radio when he found out he was as much as 1.9 seconds off Charles Leclerc after their initial runs in FP2, and the seven-time World Champion ranked outside the top 10 in second practice on Friday afternoon.

But with Mercedes looking to find speed as they are still lagging behind Ferrari and Red Bull overall, the team took chances on different set-ups, but changes will be made ahead of Saturday’s running.

“We came in wanting to do some experiments with the car, and I think the ones that we did in FP2 have taken us backwards. So, first session, we looked a bit stronger, the car was more together,” Shovlin explained to Sky Sports F1 after practice.

“There’s a couple of things that I’m pretty certain we’re going to be undoing overnight because it didn’t look great.

“Lewis had picked up a bit of damage during one of his low fuel runs, that definitely affected his high fuel.

Back in the pits to make some set-up tweaks, before the final runs 🛠️ pic.twitter.com/A5V5qrAo6s

“But as I said, I think [with] some of the set-up changes we’ve gone the wrong way. Which you know, we’re here to learn.

“You don’t always get them making the car go quicker, but as I said, I think there’s two of those that we’ll be going back on overnight.”

Rain is widely expected in Budapest on Saturday however, which could open up the possibilities available to Mercedes, if they can find performance in the wet.

Shovlin explained that with the upcoming changes in weather, Mercedes’ performance could look different in separate conditions on Saturday.

“In a way, that makes it not too bad that we’ve had a difficult FP2 because I think we’ll be facing quite different conditions in FP3 and in qualy,” he said.

“And then the race looks like it’s a lot, a lot cooler than it is today – so not the end of the world.

“But you know, it would be nice to have a session where you can work with the car a bit and this wasn’t that, but there’s plenty of data for us to go through.

“As I said, I think we know the first things we want to do. And then the wet is a different game altogether.”