'Mercedes can push the benchmark even further' | F1 News by PlanetF1 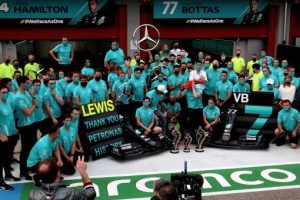 Claiming the record for the most successive teams’ titles, Toto Wolff believes Mercedes can push the benchmark even “further”.

First and second across the line at the Emilia Romagna Grand Prix with Lewis Hamilton leading home Valtteri Bottas, Mercedes took an unassailable lead in the Constructors’ Championship.

The result handed the Mercedes team its seventh consecutive Constructors’ title, beating the previous record set by Ferrari from 1999 to 2004.

“I’m not so much into the numbers, but this is something to be proud of really,” Wolff told Autoweek.

“We have a group that is just amazing together. We’ve stayed together.

“We’ve tried to push the benchmark to new levels and we’ve achieved that.

“It’s just a super proud moment with all these guys to be a part of it.”

“As long as we can stay motivated and energised, and you can see that with these guys, then I think we can push it further.

“There will be competition, no doubt, next year with Max and Honda trying to do a really good job towards the end of the season so we are looking forward to a new challenge.”

Mercedes will make it a double, also for the seventh successive season, as only Hamilton and Bottas are still standing in the Drivers’ Championship.

But while the Brit is just one race away from taking his seventh Drivers’ title, he feels winning the Constructors’ carry is a greater achievement.

“It’s a very strange sport in the sense that it is a team sport but there are two championships… but what is at the core our job is to deliver points and results for the team.

“So when you win a team championship, I think it’s almost better than an individual because it’s something you do collectively, with a large group of people, and whilst we are the ones standing on top of the podium, we are not above anybody. We are on the same level, we are all part of the chain links.

“You can tell that everyone is so happy when they get the Constructors’ title When we do the Christmas party and we celebrate with everyone, everyone just knows that they did a remarkable job and that they have done something that nobody else has done before.

“That’s cool to be a part of. Even if I was to stop today, that would be something that I would be able to share with that large group of people for the rest of my life.”