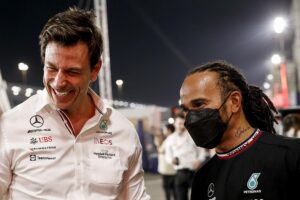 Mercedes boss, Toto Wolff, is encouraged by the strong shape the team find themselves in heading into the final two rounds of the 2021 season.

The Silver Arrows are still in the battle on both World Championship title fronts, with Lewis Hamilton just eight points behind Max Verstappen following back-to-back race wins and Mercedes holding on to a five-point lead to Red Bull in the Constructors’.

There is a sense of heading into the unknown at the inaugural Saudi Arabian Grand Prix, but the early, speculative belief is that this high-speed track will favour Mercedes rather than Red Bull.

While Wolff did not go as far to say Mercedes will be favourites for the win in Jeddah, he did draw upon an awful lot of positives that he and his Mercedes team are currently experiencing at this late stage of the season.

Two races to go in 2021. And the final two races as team-mates for Lewis and VB 💜💙 Let's bring these titles home, Team! 👊 pic.twitter.com/WEXWNR6gY7

“We are all excited to still be in the fight at this stage in the season, it’s a privilege and a testament to our resilience when we see where we stood in the early summer,” Wolff said, previewing the upcoming Saudi Arabian Grand Prix.

“Both titles are wide open, and our mission is clear.

“Last time out we saw a faultless drive by Lewis in Qatar, commanding the race from start to finish, and a strong recovery for Valtteri before the unfortunate puncture took him out of contention.

“The car has been performing well recently and is probably in the best place it has been all season, with the drivers confident to push it to the limit.

“That’s encouraging for the final races and gives us strong momentum to take forward.

“Jeddah is another completely new challenge, an all-new track to get to grips with and a lot of work has gone on behind the scenes to ensure we hit the ground running on Friday, because getting as much information as we can during those initial sessions will be vital.

“We’re more motivated than ever and we expect to be in the hunt, so we are all looking forward to the debut grand prix in Saudi Arabia.”

The motorsport community recently lost the iconic figure of Sir Frank Williams, who sadly passed away aged 79 on Sunday.

And Wolff left his final words to mention the passing legendary co-founder of Williams.

“He will be in all our thoughts this weekend and we’ll try our best to deliver a performance that’s worthy of his racing spirit.”