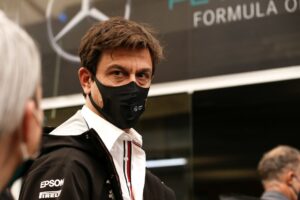 Mercedes principal Toto Wolff’s explained that his colourful radio message in Brazil was not a knock to the regulations.

The Sao Paulo Grand Prix has delivered a ton of drama off the track already, all revolving around the rear wing on Lewis Hamilton’s W12.

With the FIA finding that the DRS flap opened wider than 85 millimeters, the Briton was disqualified from the qualifying order, leaving him starting sprint qualifying from the back of the grid.

Hamilton battled his way back to P5 in a stunning recovery up the order, with Wolff taking to the radio as his driver crossed the line, stating “f*ck them all”.

It was determined by the FIA that Hamilton’s wing, although in breach of the regulations, had done so due to something going wrong, rather than a deliberate act.

That being said, Wolff clarified that his words were not a retaliation to the decision.

“I obviously didn’t mean it towards any of the regulations, it is a general mindset that we have that sometimes when there is hardship you need to build up resistance and say f*ck them all,” he told Sky F1 in a post-sprint qualifying press conference.

“The point is that yesterday the car was being tested and today, two hours before the race we got the information that we were disqualified and that is in a way sad because there are procedures in Formula 1, there is a certain modus operandi and a protocol you have to follow.

“We had a car that wasn’t in breach of the regulations of the 85 millimetre slot gap, we failed consecutive tests by the tiniest of margins.

“And in the past that would have meant fix it, we have seen it with the Red Bull rear wing last weekend, we have had many barge board things or big failures that were being put back, because the FIA has our cut drawings, they had the wings, we wanted to leave the wing with them so that they can cut it into a thousand pieces.

“We weren’t allowed to look at the wing because it was simply damaged through the qualifying session, none of these arguments counted and to be fair enough the stewards did their job, we failed that one test and their argument needs to be respected.

“And this is why we also decided not to appeal the decision, simply because of these philosophical reasons if the stewards decide you have to take it on the chin and it goes both ways.”

Valtteri Bottas provided a further boost for Mercedes on-track by securing pole for the Sao Paulo Grand Prix, jumping Max Verstappen at the start and holding the Dutchman off until the end.

So Wolff welcomed that opportunity to forget the politics and enjoy those “awesome 60 minutes”.

“Sometimes after the greatest frustrations with Formula 1 you see these awesome 60 minutes with Valtteri totally in the control of the race,” he said.

“We had a great car, good strategy, good straight-line speed and he was just brilliant and not even letting the other guy close.

“As for Lewis, coming back he did 16 overtakes to finish fifth and then certainly it is great to forget the politics for a moment and just watch great racing.”

With overtaking proving no problem for Hamilton in the sprint, his prospects are now looking far better on Sunday starting from P10.

And while Hamilton sets about his next recovery mission, now 21 points behind Verstappen in the Drivers’ standings, Wolff confirmed that Bottas will very much be pushing for victory from pole.

“I believe we have a good car here, we’ve seen over 23 laps definitely we didn’t suffer with the tyres,” said Wolff.

“Tomorrow that is a different game because it is going to be much hotter than it was, but at least it is encouraging to see that we can overtake.

“Wings were checked again today, they were okay, and he [Hamilton] is not starting from P20 but he is starting from P10, and Valtteri is right up there from pole and is certainly going to race for victory.

“So at least more encouraging than it looked 90 minutes ago.”