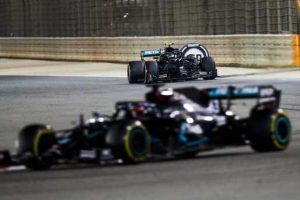 Subbing for Lewis Hamilton at the Sakhir Grand Prix, Mercedes protégé Russell covered himself in glory as he took the lead off Valtteri Bottas at the start and looked to be on course for a first-ever race win.

Mercedes, though, did the exact opposite when they called him into the pits.

With the Safety Car out for Jack Aitken’s broken wing, Mercedes made the call to double-stack Russell and Bottas with the Brit five seconds up the road from his Finnish team-mate.

It went horribly wrong with the team putting one of Bottas’ tyres on Russell’s car before releasing him. As Bottas pulled in the team realised the mistake and instead of giving the Finn one of Russell’s tyres, they put Bottas’ old tyres back on his car and sent him off.

The duo finished eighth and ninth with Bottas ahead as Russell had to stop again for the correct tyres, and then again when one of those had a puncture.

Mercedes have revealed that it was a radio issue that led to the botched pit stop.

The team has since put in place a fix and also back-ups just in case.

“It’s always painful when you learn on the job, and this is going to make us better like the many times that we fell on our nose,” Wolff told Sky Sports F1.

“We had just an intercom loophole, the channels were overlapping themselves, and the guys on George’s side didn’t hear that he was coming in.

“We fixed that now. We even put some additional back-up measures in place.

“It’s not going to happen again.”

Despite losing the win, Russell did at least score his first Formula 1 points, two for his P9 and a third for setting the fastest lap of the grand prix.

The Brit is back with his Williams team for this weekend’s season finale in Abu Dhabi as Hamilton recorded a negative Covid-19 test after a 10-day self-isolation period.