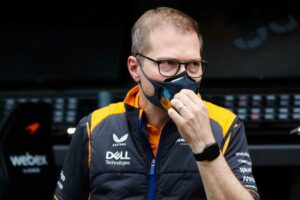 McLaren boss Andreas Seidl believes his team have turned a corner after both of their drivers finished in the points for the first time this season in Australia.

Of all the teams to have lost pace as a result of the 2022 regulation changes, McLaren were one of the hardest hit. They went from a team with a realistic target of third in the Constructors’ Championship to one outside of the points altogether.

In the first two races, Lando Norris’ seventh-placed finish in Saudi Arabia was the only points scored by the team but their fortunes changed in the Australian Grand Prix. Both Norris (P5) and Daniel Ricciardo (P6) finished in the points to move McLaren up to fourth in the standings.

Team principal Seidl believes it is a good step forward for the team.

“Obviously we are very satisfied with the result of the race,” he said, as reported by motorsport.com.

“We finished in fifth and sixth positions, we scored 18 points overall and returned to fourth place in the Constructors’ classification. It is a good step forward compared to the previous weekend in Jeddah.

“There are three reasons for this progress – we brought a few small updates that worked, our car adapted very well to the smooth layout of this track and we put into practice what we had learned in Saudi Arabia.”

Despite the progress, Seidl acknowledged there was still work to do.

Together over the finish line to a standing ovation. 🏁🧡 @F1#AusGP 🇦🇺 pic.twitter.com/tlJQEs3jxn

“It was nice to see we had competitive pace throughout the race distance,” he said.

“A similar result gives the team great motivation to keep working hard. Now we know we can fight for the top 10, something unthinkable compared to what we saw at the beginning of the season even though we are aware it is not the goal we are aiming for.

“In the race we weren’t able to compete with Mercedes, who proved to be more solid than in qualifying, but we had the certainty of being faster than Alpine, Alfa Romeo and Haas, all cars that had been ahead of us in the first two races.

“This result, compared to our start to the season, represents a turning point. For the first time we managed to bring both cars into the points, but on a flying lap we know we have a one-second gap to the top cars. Obviously we are not happy with this, but our ambition is to reduce this gap.”

Seidl said a lack of grip in slow corners was proving to be the main problem, but that it is positive they know what the issue is.

“Our weak point is the lack of grip in slow corners, but the positive aspect is we understand what we need to do to try and eliminate this problem. We are working to try to resolve everything as soon as possible,” he said.

“We will have to be patient, but the key thing is we have a clear idea of ​​what to do. However, we must evaluate various factors including the budget cap and the limitation of hours granted in the wind tunnel.”