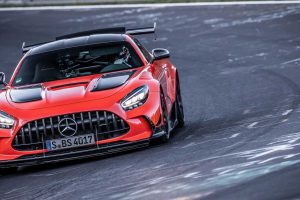 The Mercedes-AMG GT (and the new Black Series pictured above) is the perfect combination of long hood, short deck, big engine. We’ve driven all variants over the years, except for this new one, and they are truly amazing to helm. Our Christmas wish list is now a little bigger, and a lot more expensive, after Mercedes confirmed the GT Black Series is now the fastest production car on the Nurburgring (I’ve been waiting to see Santa until I found out the lap time).

The GT Black Series tackled the track, clocking two times: one at 12.8 miles and the other at 12.944. The latter is the standard going forward since the ‘Ring corporation decided to make the longer stretch the official one for lap times. No matter. The Black Series dropped a time of 6 minutes, 43.616 seconds on the shorter track, a bit more than a second quicker than the Lamborghini Aventador SVJ. Adding the new portion of the track brought the time to 6 minutes, 48.047 seconds, still faster than the Radical SR8 LM, which held the top time for almost a decade. 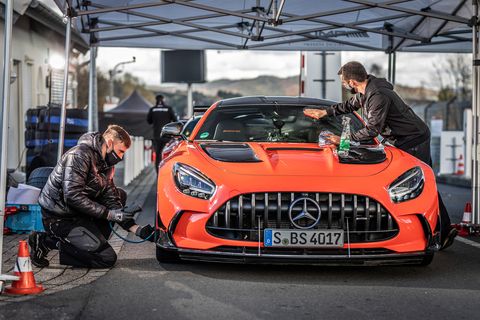 The AMG GT Black Series gets the company’s 4.0-liter twin-turbo V8 under the hood, in this application tuned to a monstrous 720 hp. The aero and suspension both feature adjustments and all were tuned to “race” positions. GT3 driver Maro Engel opted for the maximum camber (negative 3.8 degrees in front and negative 3 degrees in back) along with the stiffest setting on the antiroll bar. Tires are always a question and the AMG used the standard-equipment Michelin Pilot Sport Cup 2 R MO rubber to claim the record.

A quick note about the ‘Ring laps: since 1997 the 12.8-mile circuit was the measurement. But in 2019 the track’s operating company Nurburgring 1927 GmbH & Co. added the 761.155 feet, “because the start and finish line are identical here, also on the T13 section, so a full Nordschleife lap of 12.944 miles is driven and measured with a flying start.”

The lap times on the Wikipedia page measured before 2019 use the 12.8-mile lap; the ones after use 12.944. Expect to see some asterisks and explanations on that list soon.

“That was a really impressive ride,” said Maro Engel after completing the record lap. “With speeds of up to almost 168 mph in the Kesselchen section of the track and well over 186 mph on the long Döttinger Höhe straight, the AMG GT Black Series is significantly faster than my GT3 race car. To finally drive around the Nordschleife in 6:48.047 minutes (for the 12.944 mi total track) with a production road car in these track conditions is really awesome. Like my GT3 race car, the AMG GT Black Series offers a lot of adjustment possibilities, all of which enabled me to create a setup that was tailor-made for me.”

The time was measured by a German company called wige Solution, with an independent notary in tow.

The 2021 Mercedes-AMG GT Black Series goes on sale early next year. Pricing will be more than the AMG GT R Pro’s roughly $200K.