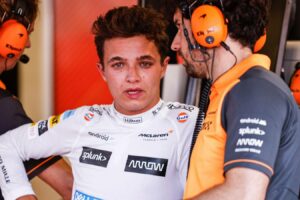 Lando Norris is on the road to recovery from tonsillitis, saying it is hard to describe how much better he feels now compared to Spain.

The McLaren driver was suffering in a major way at the Circuit de Barcelona-Catalunya, though cleared to race by the McLaren doctor, he still managed to record a P8 finish.

Norris once again got the all-clear to compete in Monaco, kicking-off the weekend in impressive fashion with a pair of P5 finishes in Friday practice.

And while he is still suffering with some throat problems, Norris revealed that the fever symptoms have now thankfully subsided.

“I’m almost there. Almost,” he told reporters in Monaco after Friday practice.

“I’m still struggling a bit with my throat, coughs and stuff like that but the main part of my fever and everything is gone. So I’m in a much better condition, I can enjoy it a bit more and actually concentrate when I’m driving and so on. And it’s been a decent first day here in Monaco, so I’m reasonably happy.”

Ferrari established themselves as the clear pacesetters on Friday, with Red Bull staring at a gap north of three-tenths which they must make up if they are to deny the Scuderia pole position, arguably the most important pole of the season.

Norris meanwhile will be looking to keep himself in that ‘best of the rest’ P5 slot, Mercedes currently looking like the most serious challenger.

The Brit admitted to being slightly surprised that he was able to finish ahead of Mercedes on Friday, so will be “very happy” if he is able to stay there.

“A little bit surprised to say we were ahead of Mercedes,” said Norris.

“I expected them to maybe be ahead of us at the minute. Yeah, the plan is to be ahead of them and if we can be then I’ll be very happy with that.”

It was a rough Friday for Daniel Ricciardo on the other side of the McLaren garage, the Aussie crashing out of FP2 as he found the barriers at the Swimming Pool section.