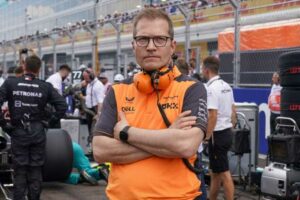 McLaren team principal Andreas Seidl says the FIA are simply enforcing the rules when it comes to the jewellery and underwear drama.

Niels Wittich, one half of the new race director set-up in Formula 1, has caused quite a stir during the opening rounds after re-emphasising a ruling relating to drivers wearing jewellery in the car,  while the need to wear fire-resistant underwear has also become part of the scrutineering process.

One driver in particular who has clashed with the jewellery side of that is Mercedes‘ Lewis Hamilton, who remains defiant having been told that after the upcoming Spanish Grand Prix he will not be allowed to wear any jewellery in the car. He received a two-race exemption, covering the Miami and Spanish GPs, to allow for his permanent piercings to be removed.

Hamilton is refusing though to take out his nose stud, which at this stage could put his participation in the Monaco Grand Prix at risk.

Seidl says the rules from the FIA are pretty clear, so if a driver does not want to follow them then they simply do not drive.

“At the end of the day, it’s a rule that has been in place for many, many years,” he said, quoted by Motorsport-Total.com.

“If you have worked in other categories, it’s not even a discussion.

“If you don’t want to take off your jewellery or put on your fireproof underwear, you just don’t drive. It’s very simple and straightforward.”

However, Seidl likes the fact the FIA have created an “open dialogue to find solutions” on issues like these.

“And that is exactly what we are asking for and what we also like,” Seidl explained. “That there is this open dialogue to find solutions.”

After serving as race director for the opening five rounds, Eduardo Freitas is set to make his debut at the Spanish Grand Prix.

Following the controversy of the 2021 Abu Dhabi Grand Prix, Michael Masi was replaced as race director by the two-person system of Wittich and Freitas who share the role, supported by Herbie Blash and a virtual Race Control.

Overall, five races into Wittich’s time in Formula 1, Seidl is happy with his work and the new system, although he did not have any complaints about the old one either.

“I don’t want to make any comparisons with the past, because from our point of view we were very satisfied with the exchange or the working relationship we had with the previous FIA set-up as well,” said Seidl.

“But from my point of view, the new set-up with Niels and also with Eduardo had a very good start into this new era of Formula 1.

“He [Wittich] is always available for dialogue and also for constructive input if you think things need to be re-thought.

“From that point of view, when I look at how the first races have gone, we are in a good situation now.”