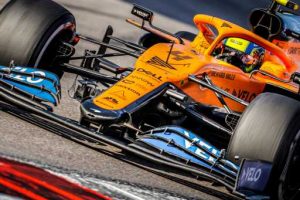 McLaren intend to push ahead with developing the new nose they tested on the MCL35 at the Russian Grand Prix.

Lando Norris tested the new nose out at Sochi and qualified P8 for the race, while team-mate Carlos Sainz put his McLaren, which had the original nose fitted, P6 on the grid, leading team principal Andreas Seidl to say the new nose wasn’t a step forward just yet.

But after working hard to meet the final Formula 1 homologation deadline, Seidl said the team have seen enough data to suggest the nose can unlock further potential for McLaren.

“With the mid-season homologation date, we obviously wanted to gain experience with it as quickly as possible,” he told Motorsport.com.

“That’s why we also decided to actually test it step-by-step as soon as we had certain parts of this package available. So the target is clear: that’s the development direction we have seen in the wind tunnel with this different nosebox concept. It is something we believe is the right direction to head to for the future.

“So the plan is to gradually now bring step-by-step more parts of this package to the track, with a clear goal to unlock more performance.”

Seidl added that such updates, and making the correct conclusions from their impact, is vital to keeping the battle with Racing Point and Renault for P3 in the Constructors’ Championship alive.

McLaren currently hold that P3 spot, but Racing Point are only two points adrift with Renault then another five points back in fifth.

“In terms of pure car potential, I think the Racing Point is similar to how it has been on average since the Barcelona test, in that it is clearly the fastest car in this battle,” he said.

“Renault, it is also clear they made a good step forward since Spa. At the same time, we were always close battling them in the races, either in front of them or in the mix in qualifying sessions.

“We have acknowledged that they made a good step forward and it’s simply down to us now to make sure we also progress with our car and find the next step in terms of pace if we want to keep this battle alive.

“It’s important to analyse what happened in Russia, also analyse in detail what the introduction of this new nosebox did on Lando’s car. And then it’s important to make the right conclusions and bring upgrades to keep this battle alive.”