Home » Racing » McLaren not burned any bridges with Alonso

McLaren not burned any bridges with Alonso 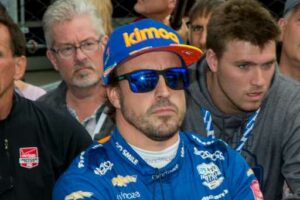 McLaren CEO, Zak Brown, has said the team’s relationship with Fernando Alonso has “never been stronger” despite failing to qualify for the Indy 500 on Sunday.

A catalogue of errors from McLaren ensured that Alonso’s dream of winning the Triple Crown is on hold for at least another year, both parties opting not to use their last option of buying the Spaniard a seat on the grid for the iconic race.

The manner in which Alonso’s preparations unravelled could have damaged the relationship between himself and McLaren, but Brown was adamant in the FIA press conference in Monaco that all is well.

“Our relationship with Fernando has never been stronger,” Brown said when asked by Crash.Net about the impact the Indy 500 failure had on Alonso and McLaren.

“He was obviously very disappointed. We let him down, he deserved to be in the race, he was an absolute star as he always has been when he’s raced with us, and my personal relationship in working with him.”

Alonso is so far keeping his options open for 2020 and the series of unfortunate events at Indy has not changed the likelihood of him potentially doing other projects with McLaren.

Brown added: “What he does post-Le Mans is up to Fernando. We have a contract with him for some McLaren activities.

“I think when you come off an emotional weekend like that you want to take some time to reflect and see what he wants to do in the future and if that aligns with some of McLaren’s activities then that would be great.

“But just like he’s been driving with Toyota, I think he’s a bit undecided on what he wants to do yet so we will pick up those conversations when I see him in Le Mans.”