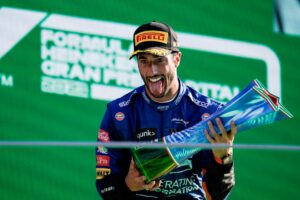 McLaren have designed a special edition of their 720S supercar to commemorate Daniel Ricciardo’s victory in the Italian Grand Prix.

But only a very elite few will get the chance to own it – there are plans to produce only three of that bespoke model, available solely to Australian customers.

Perth-born Ricciardo recorded his maiden win for McLaren and the team’s first triumph since 2012 when he took the chequered flag at Monza in September.

Not only that, but it was the first time the Woking-based manufacturer had enjoyed a one-two finish since the 2010 Canadian Grand Prix as Lando Norris crossed the line as runner-up.

Created by the bespoke McLaren Special Operations division, the customised supercar is being limited to three special edition models to reflect Ricciardo’s race number – which will also be featured on the dihedral doors.

All three will be painted in the familiar papaya spark orange colour of the McLaren Formula 1 livery, with burton blue detail and an Australian flag beside the driver’s wing mirror, in addition to carbon fibre side sills featuring Ricciardo’s signature.

Inside, there will also be touches of papaya around the dashboard and on the seating plus a commemorative ‘One of Three’ dedication plate.

McLaren have yet to confirm a price for the 720hp mid-engined supercar which will go on sale later this year.

“One of the great privileges of driving for McLaren is getting behind the wheel of many of the brand’s exhilarating supercars. And while each offers something unique, the 720S is the absolute benchmark,” said Ricciardo.

During his time at Renault, Ricciardo had a special edition of the Koleos family-sized SUV produced in his honour, which at the time was the best-selling model in the Renault Australia range.

However, the McLaren 720S is much more befitting for the 32-year-old’s status as an eight-time Formula 1 race winner – and no ‘shoey’ will be required of a driver.

Although Ricciardo made a slower than expected start to this, his first season with McLaren, his results have picked up considerably since the British Grand Prix with four finishes out of six in the top five.

He is eighth in the Drivers’ standings but still 44 points behind his fourth-placed team-mate Norris.