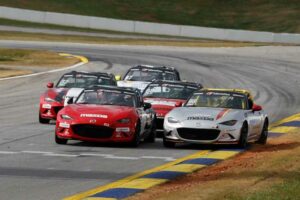 There are a whole bunch of spec series around the world based on the Mazda MX-5. The lightweight roadster is well-known for its excellent handling and light weight, making it a great base for a budget race car. With tight rules and everyone running similar machinery, the racing is usually tight, and the series finale of this year’s Mazda MX-5 Cup was no exception.

Road Atlanta hosted the final round of the series, with the Idemitsu Mazda MX-5 Cup presented by BFGoodrich Tires set to go down to the wire. Drivers Gresham Wagner, Michael Carter, and Selin Rollan all went into the final race vying for the title. Wagner and Carter had swapped the points lead multiple times throughout the season, with Rollan just behind. In fact, the three drivers have been close all year, crossing the line three-wide back in March.

Race 1 came down to a photo finish, with Carter vying for the lead with Jared Thomas in the No. 96 car. As the two clashed, Wagner in the No. 5 was able to slide past in the final corner to clinch the win, but only just. With five cars all in the mix right up to the line, it was very much anyone’s game, but Wagner came out on top.

Race 2 also delivered a thrill to the finish. Carter led on the last lap, but got loose over a hill and ended up losing time on the grass. Thomas came from behind to take the lead, managing to hold off Rollan who was practically glued to his rear bumper across the line.

The final championship standings ended with Carter in second and Rollan finishing up third, with Wagner clinching the title. The driver celebrated the win in style, with victory netting him a $250,000 prize in the process.

The Mazda MX-5 Cup is not a series that gets a whole lot of press, despite being shown live on IMSA.tv and delivering great racing. It serves as a perfect example that you don’t need to look at the top-level series to find quality motorsport action. Oftentimes, the greatest battles are found at more humble races across the globe.