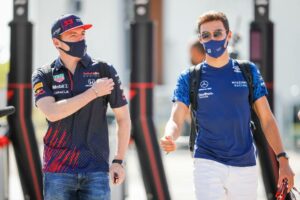 Max Verstappen is “very confident” George Russell would be a big threat to Lewis Hamilton if he joins Mercedes next year.

Confirmation that Russell will replace Valtteri Bottas with the World Champions is imminent, the first domino in an anticipated chain of events having fallen with the announcement of Kimi Raikkonen’s retirement at the end of the season.

That would free up a place at Alfa Romeo, which Bottas is expected to fill, thereby vacating his Mercedes spot for Russell in switches orchestrated by Toto Wolff.

Russell, who has collected his first 13 points for Williams in the latest two races of his three-year ‘loan’ from Mercedes, has stated he is “absolutely ready” to start challenging for grand prix victories and World Championships.

Verstappen concurs, pointing to the Briton’s performances in deputising for Hamilton at last year’s Sakhir Grand Prix and when he bagged P2 on the grid in Belgium last weekend as signals that Russell is the real deal.

“If he joins, for sure he will make it very difficult for Lewis,” Verstappen told reporters on the eve of his home Dutch Grand Prix weekend, quoted by The Race.

“I mean, he jumped into the car in Bahrain and basically was already from lap one making it very difficult for Valtteri, so you can only imagine the more experience you gain in that car and the more you get accustomed within the team naturally you will become faster.

“When you do your first race you are guided by the team about set-up direction because you just don’t know what to do really initially with the car.

“I remember my first race at Red Bull, the thing I said was ‘we’ll just follow a bit what Daniel [Ricciardo] is doing because I have no clue about what this car needs to go quick’ because even though of course F1 cars look pretty similar, the way of setting them up can be very different.

“So I’m very confident [in Russell]. You could see the performance he did at Spa was really good.

“Of course they set up the car a bit more for wet conditions but nevertheless, to do that in a Williams was very impressive.

“I do expect him to do very well if he gets that seat.”

A move to Mercedes for Russell would represent another stage in the changing of the F1 guard, as the focus shifts towards younger drivers at the top teams – Ferrari duo Carlos Sainz and Charles Leclerc are 27 and 23 respectively and McLaren’s Lando Norris just 21.

The Red Bull racer added: “It’s a natural thing – at one point, other drivers get too old so they have to retire and the new people come in. Otherwise, there wouldn’t be any drivers in Formula 1!

“Of course, it’s nice that all of us were in pretty similar categories all the time already from go-karting.

“We are not many years apart, so it’s nice that you can share these kinds of battles from go-karting all the way to F1.”