Home » Racing » Max Verstappen: Valtteri Bottas was right to back out of Turn 1 fight in Mexico

Max Verstappen: Valtteri Bottas was right to back out of Turn 1 fight in Mexico 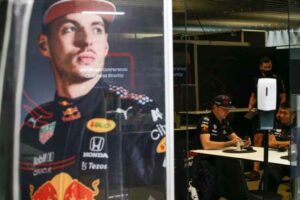 With Lewis Hamilton on his inside and Max Verstappen on his outside, Valtteri Bottas made the right choice to back out at Turn 1 in Mexico.

That’s according to Verstappen, who has again defended the Finn after he was criticised for weak defending at the start of last Sunday’s Mexican Grand Prix.

Starting from pole position with Verstappen third on the grid, the Red Bull driver used Bottas’ slipstream to gain on the Mercedes before pulling to his left and swooping around the outside of Turn 1 to lead.

That pass set up Verstappen’s ninth win of this season and saw him extend his advantage in the Drivers’ standings to 19 points ahead of Bottas’ team-mate, Hamilton.

Neither the Briton nor their team boss Toto Wolff were impressed with Bottas, criticising him for giving up the lead too easily to Verstappen.

The Dutchman though, says Bottas didn’t have much of a choice, it was either that or risk a collision that could have taken Hamilton out of the race.

“He had Lewis on the inside, so I don’t think Valtteri actually could have done a lot more than what he did,” he said to Sky Sports.

“He doesn’t want to risk the touch with Lewis, so it’s normal that the guy in the middle then backs out of it.”

Verstappen was quick to defend Bottas in the wake of Mercedes’ criticism and stands by his comment that it wasn’t fair on the driver.

Max Verstappen has defended Valtteri Bottas following Toto Wolff's criticism of the Finn's driving at the start of the Mexican GP.

“I don’t know what Toto is talking about. You can easily blame it on Valtteri but I think that's very cheap.”https://t.co/1lorQC4IiU #F1 pic.twitter.com/MTP61ifyv9

“I don’t know if that’s correct anyway,” he said. “I think Valtteri’s been a really nice guy and a really good team player.

“So like I just explained, he had Lewis on the inside and, of course, I knew that Valtteri is not going to fight Lewis, so the only natural thing for Valtteri to do in that case is to back out.”

The Dutchman was speaking ahead of the Brazilian Grand Prix, round 19 of this year’s 22-race season.

It has been two years since Formula 1 last raced at the Interlagos circuit, Verstappen victorious in 2019.

However he and Hamilton are past Brazilian GP winners, the Mercedes driver having twice won the race.

“It should be okay, it [Brazil] has been good to us in the past, but I also know it’s not going to be like Mexico, just because of the altitude change already.

“But that’s fine, that’s how it’s been the whole year.”