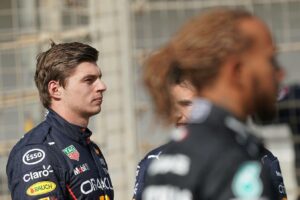 Max Verstappen has taken a swipe at Lewis Hamilton’s reported involvement in a potential takeover of Chelsea Football Club.

Hamilton, along with tennis star Serena Williams, is said to be putting £10million into one of the three remaining bids for the reigning European champions, who have been put up for sale by the UK government following sanctions imposed on Chelsea’s owner, Roman Abramovich.

The seven-time former World Champion has always been a supporter of Chelsea’s rivals from the English capital, Arsenal, with Hamilton born in Stevenage which is 25 miles north of London.

Verstappen is well aware of his rival’s football allegiance and also questioned why the 37-year-old Briton would only want to make such a relatively small investment, given the asking price for Chelsea FC is around £2.5billion.

“I’m a PSV [Eindhoven] fan and I would never buy Ajax,” the Dutchman told the PA news agency, referring to two of the biggest football clubs in the Netherlands.

“And if I was going to buy a football club I would want to be the full owner and to take the decisions myself, not own just a tiny percentage.

“But everyone does what they want with their money, so let’s see what comes out of it.”

In the interview, the reigning World Champion also discussed his on-track battles with the man who, at least for now, has supplanted Hamilton as his main rival – Ferrari’s Charles Leclerc.

That scenario has arisen due to Ferrari displacing Mercedes, for the time being at least, as the biggest threat to Verstappen and Red Bull’s hopes of winning this year’s Drivers’ and Constructors’ titles.

With Verstappen having had to retire from two of the first three races this season, winning the other in a close finish against Leclerc, he finds himself 46 points behind the Monegasque in the early standings.

“Everyone is different in their defence or attack, and so far Charles and I race very well together because we know where we want to place the car and how much room we need to leave each other. That works out really well for both of us,” said Verstappen.

“Charles is aggressive too, and you can clearly see that. We have nice battles but we don’t touch.

“It’s good to have two young guys fighting up the front in different cars and it’s good for Formula 1 that the young guys are taking over a bit.

“With these new regulations, Ferrari have started really well. Now it’s up to us to close the gap.”