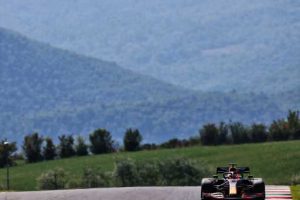 Red Bull’s Max Verstappen was happy with his showing in Friday practice at the “very cool” Mugello circuit.

Mugello features on the F1 calendar for the first time in 2020, whilst the Tuscan Grand Prix which it is playing host to is also a first for the sport.

Unsurprisingly Mercedes set the pace on day one, but Verstappen ended Friday practice only 0.246s off the pace set by Valtteri Bottas.

“A good day, we can be pretty  pleased with how the car was behaving,” he told Sky F1.

“We weren’t too far off Mercedes so that’s a good thing, balance wise there are always things to improve, but overall I was pleased.”

Asked what he thinks of Mugello after his first experience of the track in Formula 1 machinery, he said:  “It’s a very cool track, there are so many fast corners and in a Formula 1 car to take Arrabbiati 1 and 2 flat out, easily, is quite incredible.

“It’s very flowing which I like, there are no slow corners so that’s good.”

Mugello was expected to provide one of the most physical tests for the drivers out of all venues on the 2020 calendar, but Verstappen was feeling good after Friday practice.

Though he does acknowledge that the race on Sunday will be a different story.

“I felt alright today, but of course on Sunday it’s going to be pretty warm, and then of course 59 laps in a row isn’t going to be easy,” he said.

Pirelli brought the C1, C2 and C3 tyres to Mugello, the hardest compounds in their range, but Verstappen thought the rubber was holding up pretty well actually, certainly better than expected.

“It’s actually not too bad, I expected it to be worse,” he admitted.

Verstappen’s team-mate Alex Albon finished FP2 in P4, six tenths behind the Dutchman, and he was also comfortable with how the RB16 was feeling after day one.

“There are still a few more areas to just find a bit more balance in the car, but actually I’m relatively happy,” he said.

“Coming from Monza we were struggling a little bit so this is a bit more of a conventional circuit, so hopefully things are back to normal.

“It’s a really quick and there isn’t much room for error. With Lando [Norris’] crash, everyone is touching the gravel and you can feel it moving around on you, so it’s a tricky circuit because it’s so high energy. From Turn 1 to Turn 15 the car is completely different.”