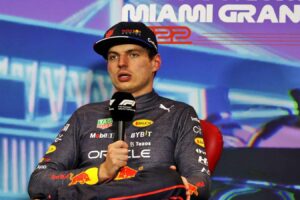 Max Verstappen feels he could have been a shoo-in for pole position in Miami had his weekend gone more smoothly in practice.

The World Champion only managed five flying laps in the first two practice sessions on Friday, hampering the process of him learning the Miami International Autodrome layout – with a brake fire eliminating him from FP2 entirely.

He did his best to redress the balance in FP3 on Saturday, but still headed into qualifying on the back foot from his point of view.

The Red Bull driver still managed to narrowly beat his team-mate Sergio Perez though, with the pair set to line up alongside each other on the second row on Sunday.

But he felt if things had been more serene, a P1 start was more than likely.

“I think it’s more that if we had a clean weekend, we would have been on pole,” Verstappen told Formula1.com when asked if he would have taken pole without his Q3 mistake.

“Because you cannot afford on a new track like this to have a weekend like we’ve had. To only do four or five laps on a Friday, we could of course sweet-talk it but it’s extremely painful.”

Those strong words were added to by the Dutchman as he lamented his lack of track time in Miami, saying getting a “rhythm” on a circuit such as this is even more important than usual – and that he and Red Bull had “failed” to do so.

“It’s been an incredibly messy weekend and we just make it super-difficult for ourselves,” the Red Bull driver told reporters.

“[Ran] four or five laps yesterday, then you start today still learning the track, trying to find the right set-up as there wasn’t much data.

“I’m of course still pleased to be third, close to the guys in front, but I think we can do so much better by operating cleaner and smoother.

“You cannot afford it on a new track like this, or a street track, as it’s critical to do laps and get in a rhythm. On a normal track it’s fine, but here it is more difficult. We failed on that side.

“Of course I think in general we are experienced enough to catch up a lot, but to fight against a strong team like that you cannot afford it. We could have done a much better job today if we had a better Friday.”

But despite his words of concern, he still thinks the RB18 can fight with the Ferrari duo of Charles Leclerc and Carlos Sainz who locked out the front row in qualifying.

“I think overall the car is competitive, we have good straight-line speed again,” he said.

“It’s a new track so we don’t have a lot of information. It will be super-warm tomorrow so we don’t know what will happen with the tyres, so there’s still a lot of question marks. But of course I’d prefer to start a bit ahead.”