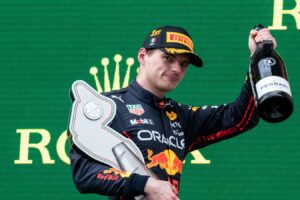 Max Verstappen said he was “honoured” to receive the prestigious Laureus World Sportsman of the Year award in the hours after his race win at the weekend.

The World Champion received the award after the achievements of his title-winning season last year, in what will go down as one of the all-time great years in Formula 1.

Verstappen joins Michael Schumacher (2002, 2004), Sebastian Vettel (2014) and Lewis Hamilton (joint alongside footballer Lionel Messi, 2020) to win the global award, for which the most elite athletes from across the sporting spectrum are nominated.

The Dutchman’s win was announced shortly after he took his 22nd Formula 1 race victory at Imola on Sunday, and he was understandably thrilled to beat competition such as NFL legend Tom Brady and footballer Robert Lewandowski to the gong.

Off course I have to thank @redbullracing, as I couldn’t have managed this without their incredible support

A special thank you goes out to my dad @MaVic009 I’ll never forget everything he did #Laureus22 pic.twitter.com/KhVZVPj2DA

“First of all, a big ‘thank you’ to everyone from the Laureus Academy for voting for me,” he said while accepting the award from Dutch footballing legend, Ruud Gullit.

“It was a very crazy and hectic year and, of course, I was very happy to come out on top. It was really my dream come true because that’s what I worked for from a very young age.

“But also, it’s not only me – it’s the whole team behind me. So many people working on basically two cars to perform to give me that opportunity to win the championship, and eventually of course also winning this award.”

Red Bull team principal Christian Horner added: “Max is such a deserving winner because he just demonstrated that if you want something bad enough, if you never give up, if you keep pushing, you keep believing in yourself, anything is possible.

“We’ve been up against opponents that had dominated the sport for the past seven years, the best and most successful driver of all time, but Max and the team have managed to take them on and to beat them.”

Verstappen’s victory at the weekend saw him rise to second in this season’s Drivers’ Championship, reducing his deficit to Charles Leclerc at the top to 27 points.

His win also came in the form of a grand chelem – having taken pole, led every lap of the race and earned the fastest lap.

This is also added to by the Red Bull driver winning and leading every lap of sprint qualifying as well, so news of the award came to effectively cap off the perfect weekend for him.