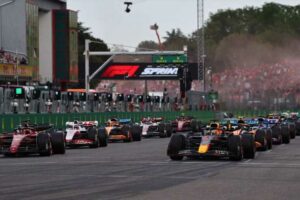 Max Verstappen pledged to spend time analysing his “weird” start, from which he recovered to win the Emilia Romagna Grand Prix sprint.

The World Champion was on pole position at Imola for the first of this season’s sprints and duly came home first, ahead of his fellow front-row occupant Charles Leclerc.

But that was not how it had looked like playing out for most of the 21-lap contest as the Ferrari driver had got away in front from P2 and held the advantage until Verstappen, who had looked after his tyres better, began to close in entering the decisive stages.

Aided by DRS, the Red Bull man got ahead and went on to win by almost three seconds, collecting the maximum eight World Championship points on offer and securing pole position again for the full-distance race on Sunday.

P1 in the sprint and some good points for the team 👍 We’re well underway but have to finish it all tomorrow 👊 pic.twitter.com/o07cFBIOKW

But when the duo – who have taken every win between them so far this season – line up side by side again, Verstappen knows he will need a cleaner start having sarcastically complained of “lovely gear sync that” as Leclerc roared past.

Asked in an interview with Sky F1 if he was confident the sprint would come back to him, the Dutchman said: “I was hoping for it but there were no guarantees.

“The start was very poor. We need to analyse why it happened like that because I think all the starts I did this weekend were quite good, so a bit weird.”

Talking through his race, and how his tyres had remained in better shape than Leclerc’s, Verstappen continued: “The soft tyres were on the edge to do 21 laps, but we had good ‘deg’ and that actually saved us at the end because we were looking after our tyres a bit better on the front axle.

“That made me close the gap again and get within the DRS. These cars are better to follow, but still when you get within like 1.2 or 1.0 second you are sliding still a bit more and so it was a bit hard for me to get into it (DRS range). But once we were in, it took a few attempts but then we got by.”

Asked about his race pace for the grand prix, Verstappen added: “It looked good but I need a good start, of course.

“But also tomorrow we will use some other compounds and probably the ‘deg’ will be a bit lower on that, so I expect the battle to be closer tomorrow.”