Home » Racing » Max Verstappen on TD: If you can't design the car properly, that's your fault

Max Verstappen on TD: If you can't design the car properly, that's your fault 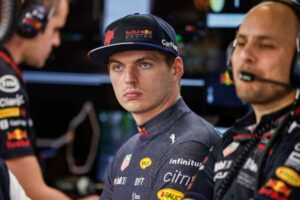 Max Verstappen isn’t impressed that the FIA have implemented a mid-season rule change, saying “if you can’t design the car properly for that then that’s your fault”.

With all-new cars on this year’s grid, many of the teams – most notably Mercedes – have discovered what is for them an all-new problem, porpoising.

A consequence of ground effect aerodynamics, the cars bounces up and down which is at best uncomfortable experience and at worst it is very painful.

The drivers have been complaining more and more of the latter with Lewis Hamilton helped out of his car after the Azerbaijan Grand Prix.

Concerned about the long-term impact on the health of the drivers, the FIA issued a technical directive on the eve of the Canadian GP with safety in mind.

Reigning World Champion Verstappen says that is a “shame”.

“I think it’s a bit disappointing that again there is a rule change mid-season, I would say,” Verstappen told RACER.

“It’s not even about affecting us more or less than other teams, but it shouldn’t be that one team is complaining a lot and suddenly then they change the regs around it.

“I think there are a lot of teams that actually did an amazing job to not have these kind of issues, so it is possible to drive around it.

“If you raise your car then you won’t have these issues, but you lose performance. But if you can’t design the car properly for that then that’s your fault, it’s not the regs fault.

The TD though is likely to have a negative impact on the team’s suffering with porpoising as, unless their level of vertical oscillations is deemed “safe”, they will have to raise the ride height of the cars by 10 millimetres.

Verstappen still feels a rule is a rule and it should not be changed.

“Of course every track is different,” said the Red Bull driver, “but I think it’s a bit of a shame to change it mid-season and clearly teams have shown you can drive normally, or at least with a lot less issues than some other teams.”

But while the Dutchman isn’t happy, Kevin Magnussen, a driver who revealed earlier this year had been left in pain from his car bouncing, is.

Applauding the “grown up” decision by the FIA, he told The Race: That’s kind of why they’re there, it’s part of their job to step in because we can’t leave it up to the teams.

“Teams are always going to do what’s best for them, which is natural, and everyone should expect everyone to do that. That’s how it is.

“So that’s why the FIA is there, to step in as the grown up and make sure things are right.”

AlphaTauri’s Pierre Gasly added: “I’m happy that they are taking it seriously and try to make some measures as fast as possible.

“It’s a real concern for all of us drivers. At the end of the day, we are the ones in the car having to deal with all these impacts and pains and stiffness that it creates in our back.

“I’m just happy they understood the message and reacted quickly with some action.”