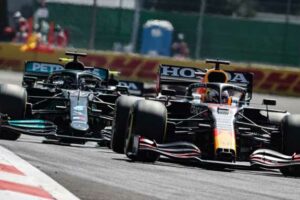 Max Verstappen isn’t yet clearing a spot for the Driver’ Championship trophy, conceding that “things can go wrong very quickly”.

With four races remaining there are 107 points still in play, meaning there is still time for momentum to swing the other way – and it almost did in Mexico.

Although many expected Verstappen to dominate qualifying, it went wrong for Red Bull on his final hot lap as his team-mate Sergio Perez made a mistake and Verstappen backed off a result.

Despite that the Dutchman came storming through at the start of Sunday’s 71-lap race to take the lead into Turn 1 on the opening lap. He went onto win the race by 16 seconds ahead of Lewis Hamilton.

It was the Red Bull driver’s ninth race win of this season, extending his lead in the standings to 19 points.

But while Verstappen has won half of this year’s grands prix, he acknowledges that there is still a long way to go in the season.

“It’s of course looking good but also it can turn around very quickly but I’m looking forward to Brazil. I have also very good memories there.”

He added: “I don’t believe in momentum.

“So, every single race we have to try and nail the details and we didn’t do that yesterday [qualifying], so you know, things can go wrong very quickly, or can go right.

“So, it’s going to be really tight and exciting to the end. This has been always a track really good for us, so I expect Brazil not to be like it was today.”

As for Hamilton, he agrees that final chapter has not been written.

The seven-time World Champion, looking to set a new record of eight Drivers’ crowns, said: “I mean, there’s still four races, there’s still… obviously 19 points is a lot of points and I think, was that your ninth or 10th win? So, you know, he’s had a lot of wins this year.

“I think today with their superior speed, if they were to carry that into the next ones then we may be in trouble – or we will be in trouble.

“But if we… I don’t know if they’ll be wearing… be using that huge wing that they had on today, naturally we’ll find out when we get there but I hope we’re closer.

Asked if Brazil was a must win, the 36-year-old replied: “I naturally feel I need to be winning every race, because we need those extra points, not to lose those points, to try and regain, that was the goal going into the last race and the race before that and before that and here this weekend.

“But it just, you know, they’re just too quick, so giving it absolutely everything we’ve got but unfortunately it’s not enough at the moment to compete with them.”

Red Bull slashed their deficit to Mercedes in the Constructors’ Championship to just one point with their double Mexican GP podium. Sergio Perez was third on the day.