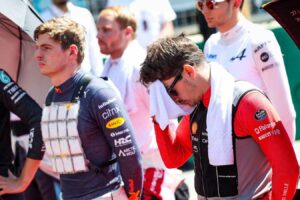 Max Verstappen responded nonchalantly when asked if he felt sympathy for Charles Leclerc after his latest Ferrari issue.

Leclerc suffered his second retirement in three races with an apparent engine issue when his Ferrari was seen emitting smoke from the rear of the car, forcing him to pull over on lap 20 of the  Azerbaijan Grand Prix.

The Monégasque driver had taken his fourth consecutive pole position but was beaten off the line by Verstappen’s Red Bull team-mate Sergio Perez, and had been running in a net second place before his retirement.

That enabled Verstappen to pass Perez without a Ferrari in between them and eventually take a dominant race win that moved him 34 points ahead of Leclerc in the World Championship.

And while the reigning champion acknowledged he would feel the same if the situation was reversed, it is just a part of the game.

“I would always say sh*t happens,” Verstappen told reporters after the race. “That’s racing. It happened to me, it happened to many people in the past. Unfortunately, it’s happening to Charles.

“If I would be in the same situation I would also be disappointed, I think that’s very normal. But it’s about how you come out of it.

“You always look at how to improve things. That’s what we did as well at the beginning of the season.

Leclerc had opened up a 46-point lead at the top of the championship after Verstappen suffered two DNFs in Bahrain and Australia respectively, but two retirements and a strategy blunder in Monaco have cost Leclerc what could have amounted to more than 50 extra points in the title race.

Now it is two retirements apiece for the season between the two, Verstappen thinks they are now even in terms of their hard luck.

“Of course, we had our misfortune at the beginning of the year, so we knew we had to play a bit of catch-up,” he said.

“But then of course it seems like now it’s more or less evened out with the bad luck, and you have to score points every single weekend if you want to really fight for the championship.

“Everyone knows that, everyone of course tries that, but it’s not always that easy.”

Red Bull also opened an 80-point lead at the top of the Constructors’ Championship, with their one-two finish taking full advantage of Ferrari’s double DNF.