Home » Racing » Max Verstappen not in F1 to 'entertain' off the track, won't compromise performance

Max Verstappen not in F1 to 'entertain' off the track, won't compromise performance 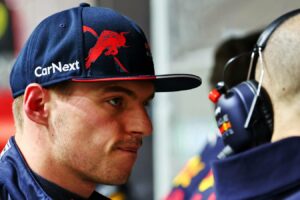 Max Verstappen says he’s not in Formula 1 to entertain the crowds off the track, as too many commitments can “hurt your performance”.

As Formula 1’s reigning World Champion, Verstappen is in demand.

Not only do journalists want interviews but fans would like to meet him, say hi and get an autograph.

The latter is being made easier of late given the lifting of COVID restrictions, fans lining the path into the Albert Park circuit to catch a glimpse, and a selfie, with their favourite driver.

But don’t expect Verstappen to tire himself out with off-track commitments, the Red Bull driver adamant he won’t compromise his performances by wearing himself down.

“Even if there is no COVID for sure I’m not going to do more… on weekends because I’m there to race, I’m not there to entertain the crowds,” he said to Reuters.

“I’ll entertain them by doing that on the track.

“Otherwise you get upset, you don’t feel good and it’s going to hurt your performance. So you need to just keep it exactly the same, the same approach as other race weekends.”

Thank you for the warm welcome fans, great to be back here after such a long time 📍🇦🇺 pic.twitter.com/0872TtJL94

The Dutchman believes he has the right support in place to ensure his scheduled is managed properly.

“You need the right people around you as well to manage you in that,” he said.

“Of course at one point as a driver you know what you need to feel good in the car and you really know how many commitments you can do on a weekend.

“But you should be able to say ‘no’ to certain commitments. At the end of the day you are here to drive and to race because that’s what you live for and what you get paid to do.”

But while Verstappen maybe the World Champion, his former team-mate Daniel Ricciardo is the local lad at this weekend’s Australian Grand Prix.

And that, Verstappen reckons, becomes a huge drain on the Aussie’s reserves.

“I always felt sorry for him because he was always so busy,” said Verstappen. “He actually never really got to fully enjoy it.

“Maybe he manages it differently now but I remember when he was here it was tough, he was super busy in the week leading up to the grand prix.

“So I hope for him that at least he can enjoy it a bit more now because I think it is very special to have a home grand prix.”