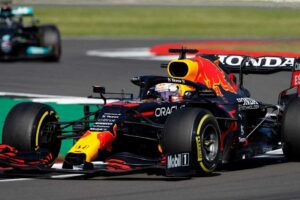 Max Verstappen put himself in to Formula 1’s history books after claiming victory in the championship’s inaugural Sprint Qualifying at the F1 British Grand Prix on Saturday at Silverstone.

It was the first outing for F1’s new-for-2021 Sprint Qualifying experiment. It was introduced in the wake of championship chiefs trying to spice up the format for the fans while retaining the integrity of the sport.

The race took place across 17 laps in hot and sunny conditions at Silverstone and provided a modicum of entertainment for the 105,000 spectators in attendance.

The highlight was a thrilling first-lap duel between Verstappen and fastest qualifier Lewis Hamilton, which was settled in favor of the current title leader, who survived a minor brake fire while waiting on the grid. There were no passes inside the top four after that opening lap, with Verstappen leading all 17 laps, ahead of Hamilton, Valtteri Bottas and Charles Leclerc.

Further back there was a little more excitement.

Fernando Alonso’s gambled on soft tires and vaulted from 11th to fifth. The higher wear of his softs allowed Lando Norris and Daniel Ricciardo, on the more durable mediums, to pass. Red Bull’s Sergio Perez was the big loser after spinning early on, dropping from seventh to 20th—from where he will start Sunday’s Grand Prix. The post-race celebrations were slightly awkward, with the top three driven around on a truck that was laden with sponsorship, though that helps pay the bills for Formula 1.

Unsurprisingly, F1 chiefs were approved of the spectacle, though emphasized that they will listen to feedback from drivers, teams, stakeholders and fans after the next two trials—set to be held in Italy and a yet-to-be-determined third event—before drawing a full conclusion.

“I’m very pleased,” F1’s director of motorsports Ross Brawn told media in the aftermath. “It’s a completely new concept for Formula 1. I think one of the things we all saw today was a racing driver is a racing driver and they’re never going to take it easy. That first lap or so was completely nail-biting, and sensational, and then we had the little duels in the rest of the race. I’d buy a ticket for that every day, so we’re very pleased.”

The general reaction in Formula 1’s paddock was mixed, though very few felt the format was an overwhelming success or a terrible disaster. It started, it happened, and then it ended.

“I can’t say I particularly enjoyed it too much but it’s nice to have more races, that’s for sure,” said world champion Lewis Hamilton.

“What is important is to try and make a good start, have a clean first lap and then you try to just settle in and follow your pace,” said Verstappen. “I tried to think about (it) before I jumped in the car and when it works out it’s great. I think in the end, not much really changes.”

“It’s another race start, which is naturally always quite nice,” said Valtteri Bottas. “A bit of extra racing, but for me it didn’t actually change the weekend so much. I qualified third, finished third today, so still the same starting place for tomorrow.”

“I enjoyed it because I went forward,” said fifth-placed Lando Norris. “I finished higher from where I started, so for the main point in today’s race we did a good job. But we are doing it for the fans, so is more a question for me to you [the media], did you enjoy it more?”

“If (the fans) like this format, then I will very happily accept it and go on with this format,” Sainz said. “For us as drivers, honestly, for me it doesn’t change much. I like both, I will adapt myself to any of them. But there will be circuits, even today, we saw the first four or five positions, there was not much going on. Maybe we can find other sort of things to spice up the thing.”

One benefit of Sprint was it provided a high point for Friday’s action. The opening day of running at a Grand Prix weekend can sometimes be a soporific affair, with no crescendo, and little focal point for broadcasters, while racing drivers naturally prefer to race than merely drive. In moving qualifying to Friday evening, it gave the day a headline, and also raised the importance of the one-hour FP1, with teams having limited running in which to settle on a set-up for the remainder of the weekend.

“Normally I’m so bored in the car on the Friday,” said Ferrari driver Leclerc. “Yesterday it felt a bit more exciting and there was a bit more to gain to push straight out of the box in FP1 to be ready for qualifying.”

“I can see that maybe in the future there will be more of this,” suggested Aston Martin’s Sebastian Vettel. “I’m sure the people liked it, I guess it is better than free practice.” 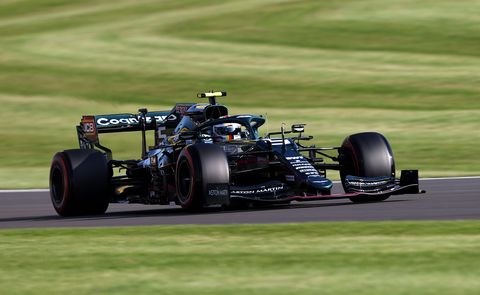 The main drawback of Sprint was in pole position not being awarded to the fastest driver across a single lap, creating a statistical anomaly. Hamilton deserved the 101st pole position of his career, not the clumsily sponsored Pirelli Speed King Award, for his fast lap around a special circuit. Brawn conceded that F1 is open to tweaking it, but for now Verstappen will be credited with pole position for winning a 17-lap race.

“For me, personally, qualifying is where you should get pole position and of course Lewis was ahead there,” said Verstappen. “You jump out of the car and it does mean something but not the real hype that I nailed the lap and I put it on pole or whatever. When I crossed the line today after this race and they were like ‘yeah great job, pole position’ it feels a bit like… I did one-third of a race distance and then to hear you got pole position for tomorrow, it’s a bit odd.”

Overall, in the immediate aftermath, there was the atmosphere of an experiment that did not thrill but neither disappointed. Nevertheless, perhaps the impact of Sprint will only truly be fully understood once the Grand Prix itself has been conducted on Sunday at Silverstone.

“I like it, the format,” Fernando Alonso said. “We have action in the three days, Friday, Saturday and Sunday, so it’s good for the people. Last year when I was watching races at home, Friday meant nothing because the long runs, they are very important for the drivers, teams, etc, but not for the people at home. They were very long free practice to understand from the outside.”