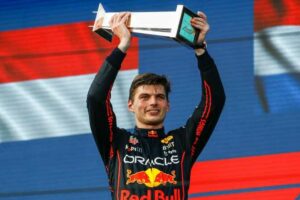 Max Verstappen’s win at the Miami Grand Prix saw him move into the top 10 on the all-time Formula 1 podiums list.

A long time has passed since an 18-year-old Verstappen became the youngest F1 race winner, youngest podium-sitter and the youngest driver ever to lead a lap at the 2016 Spanish Grand Prix and the Dutchman has only added to his list of accolades since the race in Barcelona.

He has started 146 races, winning 23 of them, and his 63rd career podium finish in Miami saw him break into the top 10 on the all-time list.

Verstappen moved past former Red Bull driver David Coulthard on his way into the elusive club and could move up further still this season with Valtteri Bottas (67), Rubens Barrichello (68) and Ayrton Senna (80) all within reach.

The Dutchman’s 23rd win was one of his easier ones, having led from early on. A late Safety Car meant Ferrari’s Charles Leclerc cut the gap to under a second but Verstappen was soon able to build the distance once more.

His boss, Christian Horner, highlighted Ferrari’s decision not to pit for fresh tyres under the Safety Car as a contributing factor to Vertsappen’s win and admitted his team had been “lucky” in that regard.

“After the Safety Car we were quite lucky Ferrari didn’t stop and take on new tyres for that,” Horner told Sky F1.

“They probably could have put on the soft tyres, so at least that neutralised things, but then once Charles was in the DRS [range] we couldn’t shake him off.

“And Max, it’s so much pressure in that position that it’s just easy to lock a wheel and so on and he kept it clean, he didn’t make any mistakes then gradually was able to break…it took him about five or six laps to break the DRS and then he was able to manage it from there.”

Horner also said he believed Leclerc had “a little bit of a moment” in his attempt to catch Verstappen, which allowed the reigning World Champion to move clear once more.

Verstappen seemed to comfortably have the beating of Leclerc before the Safety Car came out, at which point Leclerc could then suddenly attack once the racing resumed.

“And then finally I think Charles had a little bit of a moment. Max was able to use it and then he broke the DRS and was able to build a lead.”