Home » Racing » Max Verstappen: I would have preferred to have been attacking!

Max Verstappen: I would have preferred to have been attacking! 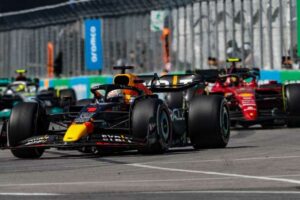 Red Bull’s Max Verstappen had to defend hard against Ferrari’s Carlos Sainz in the closing stages of the Canadian Grand Prix.

Max Verstappen was left with a difficult challenge in the closing laps of the Canadian Grand Prix, after a late Safety Car closed up the field.

Verstappen had pitted just six laps before the Safety Car, emerging 10 seconds behind Ferrari’s Carlos Sainz and setting off in hot pursuit of the Spaniard.

With the race seemingly heading Verstappen’s way, the Safety Car allowed Sainz a chance to pit for fresh tyres and emerge directly behind the Dutch driver before relentlessly hounding the Red Bull driver the whole way to the chequered flag.

Having had to weather the pressure of Sainz’s attacks, Verstappen beamed after crossing the line to open a 46-point lead in the Drivers’ Championship.

“The Safety Car didn’t help!” Verstappen laughed as he spoke to the media after crossing the line.

“I think, overall, they [Ferrari] were very quick in the race so it would have been really tough for me to close that gap at the end.

“It was really exciting at the end. I was giving it everything I had. Of course, Carlos was doing the same. Following is tricky around here but I could see he was pushing, charging, pushing.

“But, of course, when you’re under DRS, it’s a bit easier to charge.”

Despite Sainz staying within DRS range to continue the hunt of Verstappen, the reigning World Champion said he was thrilled with the speed of the RB18 in defence.

“Luckily, this year we seem really quick on the straight so that helps a lot,” he said.

“Overall, I think they were very strong in the race. So yes, it would have been tricky to catch up but then, of course, the Safety Car came out so they had fresher tyres. I think I would have preferred attacking instead of defending but luckily it worked out.”

Chased all the way to the line, but Max soaked up the pressure to take his sixth win of 2022! 🏆#CanadianGP #F1 pic.twitter.com/gWoiU21LQr