Home » Racing » Max Verstappen given the all-clear after 51G shunt

Max Verstappen given the all-clear after 51G shunt 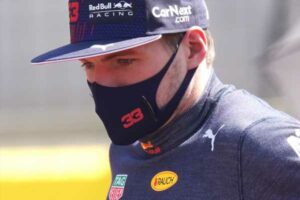 Max Verstappen has been given the all-clear and released from hospital “without any major injuries” according to his team, Red Bull.

The Dutchman was involved in a high-speed crash with his title rival Lewis Hamilton on the opening lap of the British Grand Prix.

He hit the barrier with an impact at 51G.

Team boss Christian Horner said at the time that his driver was feeling “battered and bruised” with Verstappen taken to Coventry Hospital for further checks with reports saying he was also feeling dizzy.

He was released late last night, Verstappen escaping without any serious injuries.

Red Bull said in a statement: “Following a first lap incident at Copse Corner between Max Verstappen and Lewis Hamilton at the British Grand Prix, we can confirm that Max Verstappen walked away from his car and was immediately taken to Silverstone Circuit Medical Centre.

“Following an assessment by the trackside doctors at Silverstone Circuit Medical Centre, Max was taken by helicopter to Coventry Hospital for further tests and observation.

“We are pleased to confirm that Max was released from hospital at 22:00 this evening, following a thorough medical examination, without any major injuries.

“Max and the team would like to thank the trackside Marshalls and medical staff for their exceptional care both on-site at Silverstone and in Coventry Hospital.”

The driver took to social media to let his fans know that he was okay.

Cleared from the hospital after all the checks were ok. Thank you to everyone for all the nice messages and best wishes 🙏🏻 pic.twitter.com/zBlfbQ8uh4

His father, Jos, told Ziggo Sport that his son was “bruised” and had hurt his shoulder in the crash.

“He [Max] felt a bit light-headed and went to the hospital for a CT scan,” he said. “Otherwise, he was okay.

“He also had a bit of pain in his shoulder and was a bit bruised all over. But yeah, it sucks.”

As for the incident, the former F1 driver said: “I looked at the incident with Max to see exactly what happened,. Max said ‘I gave him enough space and I was already half in front of him. He just drove his front wheel into my rear wheel. Then you know that you are wrong.’

“And if you only get a 10 seconds time penalty for that, I think it’s ridiculous … Especially in a corner like that, it’s just not right.”

Hamilton went on to win the race with Verstappen unimpressed by his title rival’s celebrations.