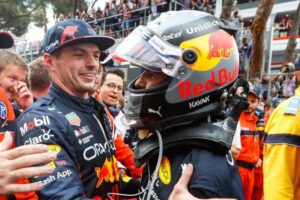 Max Verstappen and Sergio Perez are “still going to be in love” even if this year’s title fight comes down to team-mate versus team-mate at Red Bull.

Holding on for the win at the Monaco Grand Prix, his second victory as a Red Bull driver, Perez closed his gap to Verstappen to just 15 points in this year’s Drivers’ standings.

But, based on what happened in Spain, where Perez was ordered to move over for his team-mate, it would seem that Red Bull have chosen their championship contender.

If Perez is allowed to fight Verstappen for race wins and the World title, history has shown that even intra-team battles have a tendency to turn nasty when it really matters. Just ask Mercedes.

Verstappen, though, doesn’t believe that will happen to him and Perez.

“I don’t think so, in terms of whether the relationship will change,” he said. “We have a good…”

Perez jumped in: “We are still going to be in love, right?”

“Yeah, absolutely,” he said. “Why would that change?

“We work really well as a team. We always try to optimise the car and work for the team and we can accept when somebody does a good job or does a better job and I think that’s very important because that’s how you are respectful to each other.

“Yeah, may the best man win at the end, right?

“We always, of course, trying to do the best we can on the track but we also respect each other a lot and try to score the most possible points every single weekend for the team.”

Dutch racer Jeroen Bleekemolen believes in Perez and Verstappen Red Bull have a really good line up, although he does not believe the Mexican will be allowed to beat Verstappen if they are running 1-2.

“He’s just sitting there comfortably,” he told Motorsport.com. “The bond with Max is good and he’s been performing well lately.

“Basically he knows his role as a second driver, but he’s starting to participate again. He’s coming.

“In terms of points, he is in good shape. If Max drops out, he can just end up in front of it. A new person is always a risk and this works. So that was a good choice.”