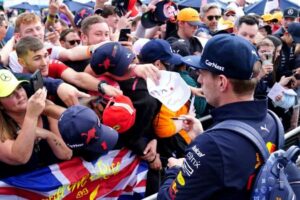 Boos rang out for Max Verstappen after qualifying at Silverstone – which, despite playing down their effect, he admitted had disappointed him.

Verstappen had already been subjected to such behaviour on Thursday when walking the Silverstone track, with the connection between the Red Bull driver and home hero Lewis Hamilton behind it.

The collision between Verstappen and Hamilton at this venue in 2021 proved to be a key moment of controversy in their title battle, as did the circumstances surrounding Verstappen’s last-lap pass on Hamilton in Abu Dhabi to snatch the World Championship.

As well as these factors likely not helping Verstappen’s popularity on Hamilton’s home soil, the jeers may also be linked to Verstappen’s association with Nelson Piquet – who, before the British Grand Prix, had been widely condemned for using racial slurs against Hamilton in a podcast last year. Verstappen is in a relationship with Nelson’s daughter Kelly.

Verstappen has spoken out in support of Hamilton, saying Piquet was in the wrong for using the words he did, although he denied the three-time former World Champion is a racist.

Nonetheless, Verstappen was booed loudly once more as Billy Monger interviewed him for Sky Sports F1 shortly after he had qualified P2 – the reaction disappointing Verstappen although not fazing him.

Speaking to reporters about the booing, Verstappen said: “It was a bit disappointing because I couldn’t understand Billy.

“The rest, if they want to boo, then they do that. For me, it won’t change anything.

“I’m happy to always be here. It’s a great track and great for the atmosphere in general.

“Maybe some of them, they don’t like me but that’s fine. They all have their own opinions and I don’t care.”

Verstappen starts from the front row after a rain-affected qualifying session at Silverstone. He spun early in Q3, although it was a moment for Charles Leclerc later in that session which cost Verstappen due to the deployment of yellow flags.

Nonetheless, he is confident the Red Bull RB18 is a strong race car in both wet and dry conditions, with rain still a possibility for the race.

“It was quite a tricky qualifying, the rain and then also it was raining, drying,” he said post-Q3.

“So you have to be on the track at the right time. But I think overall the car was working really well, just Q3 is always a bit of a lottery sometimes when you have to put the fastest lap in but I got a bit hindered on my final lap with the yellow flags, unfortunately.

“But I think still to be on the front row is very good for us and we have a good race car, I think in the dry and in the wet.”

“I was just a bit unlucky on my final lap, I had a yellow flag so I had to back out and that’s why I couldn’t do pole,” said Verstappen.

“But it’s fine, the car is working well so it doesn’t really matter where you qualify.”