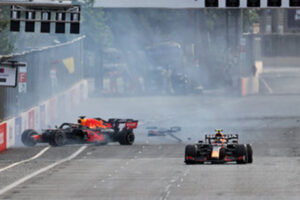 Max Verstappen has pointed the finger at Pirelli for his “life-threatening” 190mph crash caused by a tyre blowout in the Azerbaijan Grand Prix.

The Dutchman escaped unharmed from an accident in which his Red Bull RB16B careered into the right-hand wall along the pits straight in Baku due to a left rear tyre failure.

At the time, the 23-year-old looked all set for a third win of the season that would have extended his World Championship lead over Lewis Hamilton.

Instead, he left the Azeri capital still four points ahead, following a Hamilton mistake after the race had been stopped and restarted due to the crash and which left the reigning World Champion finishing 15th.

Although Pirelli have promised a full investigation into the incidents involving Verstappen and Lance Stroll, which were nearly identical, their F1 boss Mario Isola initially suspected the tyres had been cut by debris on track rather than suffered construction failures.

However, in the aftermath of the race Verstappen did not agree, for Red Bull had seen nothing on their telemetry that told them the tyre was at risk – and he believed he had been lucky to walk away from the accident.

That was partly due to the location of the crash, which happened after the pit-lane entry on the left which is separated from the track by a barrier that slants towards the circuit as the drivers approach it.

“It is certainly life-threatening,” Verstappen told reporters after the race, thankful that his car had spun to the right.

“I can also suddenly go left and then of course you end up in the wall at a completely different angle.

“And a little further on, the speed is even higher. I was going about 305 kph (190mph) so nice and easy,” he added sardonically.

Regarding the tyres, the 23-year-old added: “Pirelli will probably say it has to do with debris. You will never get the full answer to that.”

He also rejected suggestions that he should have taken a different line along the straight to avoid any debris that may have caused Stroll’s crash.

“You can say that, but everyone has already done that for a few laps before that,” added Verstappen. “So at some point the debris has to be gone. I don’t think it’s that, although Pirelli will of course give a different answer.”

Verstappen’s father, ex-F1 racer Jos, was also immediately scathing about Pirelli after the incident, with a series of tweets that included comments of “no Pirelli for me” and “what a joke”.

They always say that