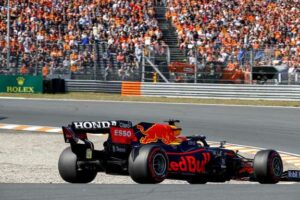 Max Verstappen has been called to face the Dutch GP stewards for an alleged red flag infringement in Friday’s second practice.

Putting in the laps around the Zandvoort circuit, Nikita Mazepin brought out the red flags when he sent his Haas spinning off into the gravel.

Immediately the yellow flags were waved but were quickly changed to reds as there was no other way to clear the stricken Haas.

Verstappen, who was on a hot lap on a brand new set of soft Pirellis, backed off but footage of the moment shows that he overtook another car at the time.

Speaking to Sky Sports after the session, former driver turned pundit Anthony Davidson said: “On this lap with Verstappen, he comes through turn 10.

“There’s a yellow flag, but after running through the traffic it goes red. By the time he gets to the hill, the circuit has gone red with a light ahead.

“There is a car on the right, I don’t know if the stewards will look at this. He had a radio call from the engineer saying red flag. I just hope the stewards allow that moment to happen.

“From personal experience, they are aggressive when it comes to the ruling of red flags. We’ll see how that unfolds later.”

Later turned out to be Saturday morning with the stewards finally made aware of the possible infringement.

They announced two hours before FP3 that Verstappen has been called to the stewards’ office.

‘Alleged breach of Appendix L Ch IV Art 1, Appendix H 2.5.4.1.b of the FIA International Sporting Code and Article 50.2 of the FIA Formula One Sporting Regulations, alleged overtaking car 18 whilst red flags were shown at 15:10 between turns 10 and 11,’ read the statement.

Should Verstappen be found guilty it would cost him a possible pole position with the Red Bull driver the favourite ahead of qualifying.

His Red Bull team boss Christian Horner reckons there may be mitigating circumstances.

Shown Verstappen’s red flag moment, he told Sky: “That’s the first time I’ve seen that. As soon as there was a red flag he backed out of it, I can only think the other car was on a slow lap anyway.

“I was watching the data, he was out of it when he got a message about the red flag.”