Mattia Binotto: 'Often Ferrari have been disadvantaged by decisions' 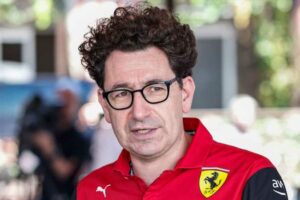 Mattia Binotto said he believes that Ferrari have been “disadvantaged by decisions” from the race directors and that the “guys need some more experience.”

Following Michael Masi’s sacking during the off-season, the decision was made to have two rather than one race stewards in the form of Eduardo Freitas and Niels Wittich for the 2022 campaign.

However, this has drawn criticism given two different people will have two different interpretations of the rules which may lead to some teams being treated more favourably than others.

This was put to Ferrari boss Binotto who believed his team had been disadvantaged but that he did “understand the difficulty.”

“Certainly not an easy job,” he said during the pre-Baku conference when asked if a third director should be added or if there should just be one for the whole season. “I think when you are there and you need to sit and decide, it’s not an easy one.

“These guys need some more experience, it’s not something which you learn from the very first race. If I look at the start of the season, certainly as Ferrari we cannot be happy with that. I think often we have been disadvantaged by decisions, but that’s the way it is. We understand the difficulty.

“I think in order to make them improve, we need to help them as well. I think it has to be a collaborative, let me say, collaboration between the teams and the race directors, to make sure they understand, they improve as fast as possible.

“Because no doubt that so far in the season, sometimes there was no consistency in decisions, I think we cannot deny that. As we cannot deny it’s not an easy job. So, it will take some time. We just need to hasten it as much as possible.”

Mercedes boss Toto Wolff was sat alongside Binotto and agreed that they need more experience and that race directors will make mistakes just as the teams do.

“Like Mattia said, it’s a difficult job because you’re also in the spotlight and certainly, Monaco, when you’re thrown into this weather condition, climate, and then suddenly you need to make decisions, that is very, very difficult.

“I think the more races will pass, the more experience they will get, the more they will cope also with the pressure that Formula 1 brings with it.

“But they are part of Formula 1, as are the teams, as the teams make mistakes, and sometimes you really blame, because a wheels not on the car, or you get the strategy wrong, so, in the same way the race director is in the firing line. I think [it’s] the same for everyone.”